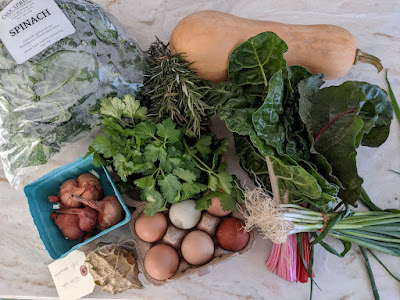 The CSA here makes me want to weep. It's about five zillion times better than Christmas (that's not hard, actually) and totally made my morning. In fact, it has made the entire stay here because it was unexpected. Even the head of the residency program didn't know for sure if we'd get shares so she didn't include it in our handbook. I am so glad that I can truly not grocery shop this entire stay but more grateful for the most gorgeous produce...and that fancy luffa on the bottom left! Hard to find seeds for it, we heard the whole story at dinner, the name is Luffa operculata. 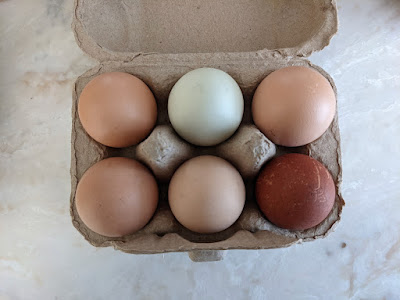 I was immediately enamored when I opened the egg carton. Last week they were all about the same color so this took over my morning in the best way. 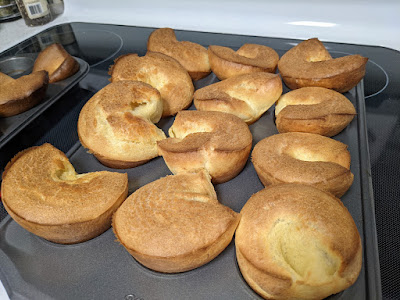 Here's my random other food-related thing: Sarah invited Calista and me to dinner over the weekend but I didn't know until that morning that it was a dinner! So I freaked out about what to bring as I was very low on food and didn't know a share was coming the following week. I found a popover recipe and made very good use of the milk that had been provided when we arrived (I haven't had cow's milk in years). If I do it again, I'll bake for a touch less than 30 min, but was very pleased by how handsome and puffy they were. 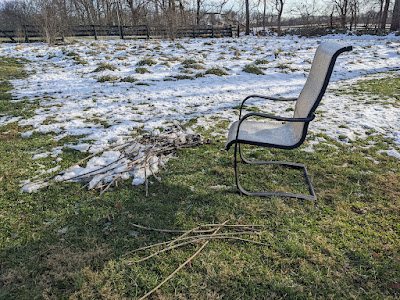 The whole reason I came back was to work with winter-retted milkweed. I got very sidetracked but today finally finished stripping. This was from a day or two ago, when I sat outside to do a few but found the snow had turned to ice and mostly the stalks were dry. 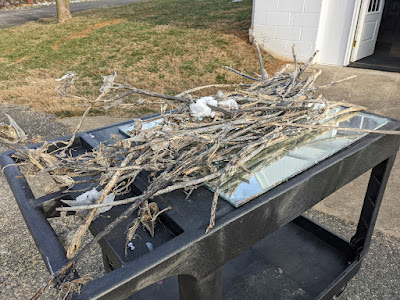 This morning I hauled them in to strip a bit before hauling them out again to put on the ground to pour water over. That's a joke; the best ones have been sitting in the snow or damp for a while. 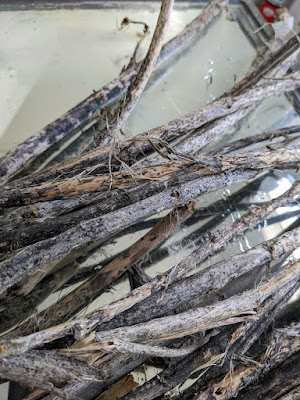 You can see it in the fiber that pulls away naturally from the stalk. The upper and lower parts of the stalks that were bent over were the best as they were submerged in snow, while the middle portion gave me more grief. But the good thing is that I can always leave fiber on the stalk (getting over the compulsion to strip it clean of all silvery fibers) and give it to the birds or whomever. 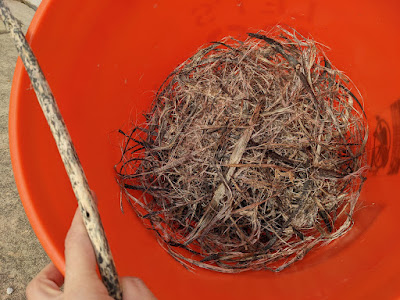 I had just under 40 stalks or so, hard to say since some broke, and this is the yield before I put it in a pot to soak. I'll cook tomorrow. 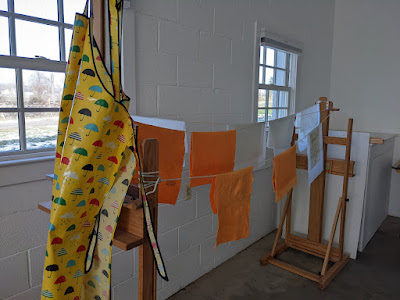 This time, there were two painter's easels in the studio so I dragged them over to rig three clotheslines. Easy peasy. 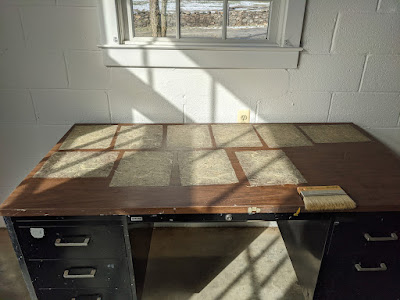 Working on this desk to dry paper, but also beat it, and do any number of things, made me realize that what used to be ubiquitous office furniture is not pretty but heavy-duty good. If I can find an old one back home, I will definitely get one for the studio. This first batch was 11 sheets but the final one was thin so I left it on the interfacing to dry on the line. 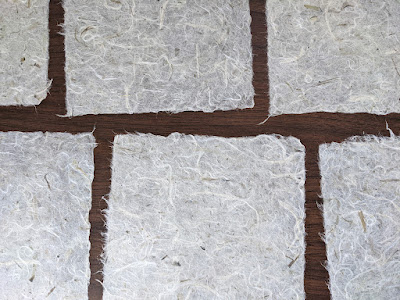 My first batch of paper was from milkweed and a touch of Florida kozo I had brought from home. Tons and tons of picking, I did a bad job sorting and did no cleaning (obviously) before I cooked. Lesson re-learned. 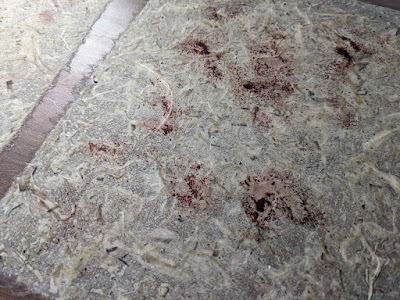 This was batch two of the same fiber, but experimenting with kakishibu powder (persimmon). I learned a lot from this minor disaster. 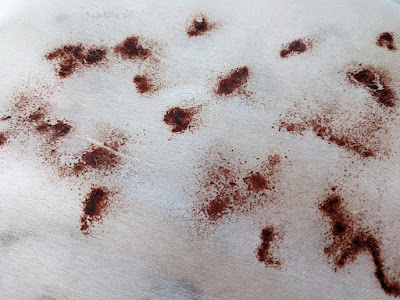 Because the powder stuck more to the interfacing than the papers! Aside from the powder I embedded between thin sheets, what I sprinkled onto the surface of wet sheets preferred the pellons. Total bummer. And reminds me why this is different from the last time I worked with this powder on paper: that was with hanji, no interfacing, soaks right in or into the next sheet. Another lesson learned. 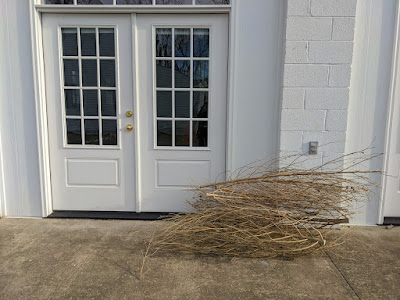 Here is my giant sidetrack. Well, this was a batch delivered yesterday evening that I just left outside because if it's in the studio I'll go insane. It's bigger hemp stalks than the first batch. This I'll likely prune to various sizes to bundle and take back home. 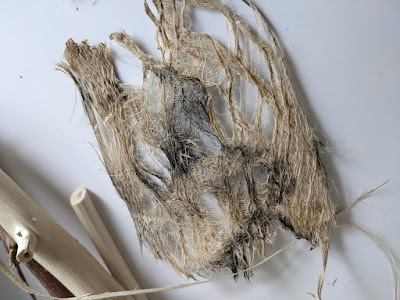 Since these are plants for CBD and not fiber, it's different but this piece i cut off and laced looks just like the structure of paper mulberry. Stripped cores are in the corner. 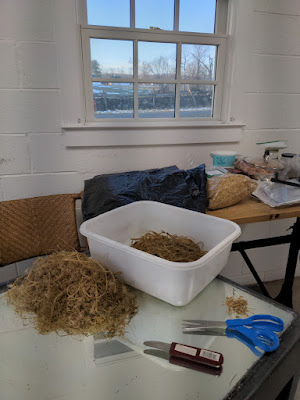 I scraped for four days straight. I wanted to quit on Day One but have finally re-learned that I should just see the whole thing through after having started the whole mess in the first place. Why do all the work of pruning and steaming and stripping if I don't do it right to the end? Trying to spar with my impatience and I am winning but my neck hurts a lot. 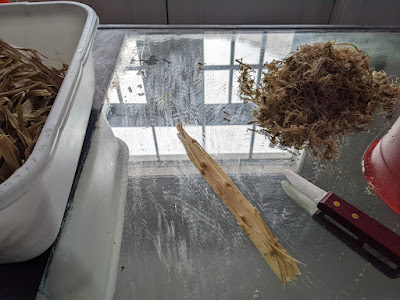 I know, these are tiny pieces. It's a test batch and it's actually somewhat easier with short stubs for now. 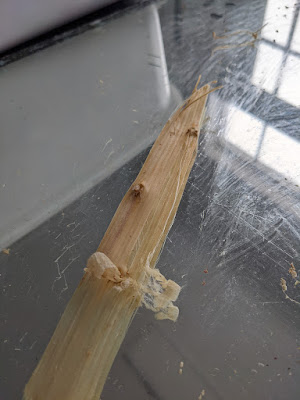 Scraping off the outer layer makes me think about every bast fiber that requires this. Going forward, I don't want to skip this step with milkweed, either. Of course plants have this layer, because they have to protect their cambium layers, where all the food runs. 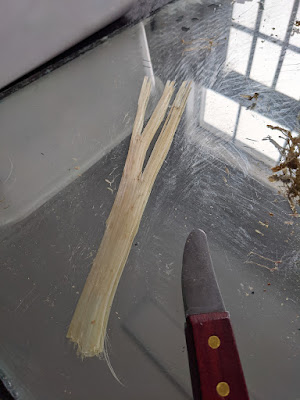 Cleaned on top of the giant mirror/paint palette that I first was annoyed by but then found very useful as I had forgot to bring a piece of wood to scrape upon. 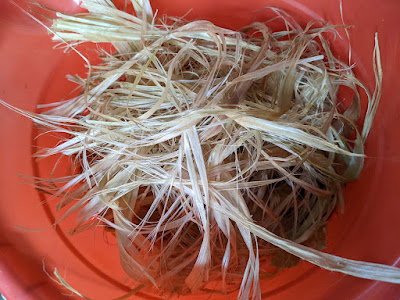 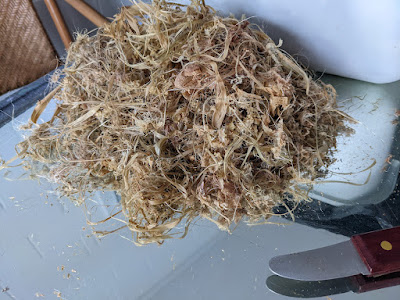 Scraped waste fiber that I cooked today (the pile got much bigger by the end) to test: will I be able to beat and make sheets by hand? Usually I assume this stuff needs a beater but it behaves so much like Ohio mulberry bast that I want to try by hand, just a little. I looked it up and these species were in the same order before the classification went defunct. But they share a new order now and I see tons of resemblances. 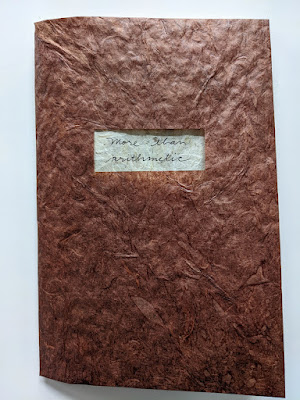 This was a book I struggled to finish back home and then today I pulled two together with the new paper. 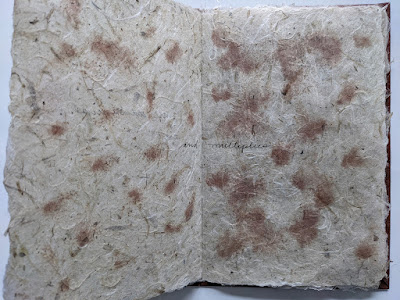 Messy but now that idea is in the world and flattening in the press. 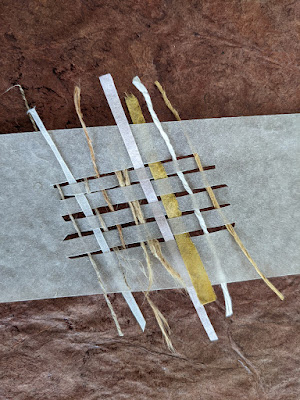 I have another bear of a book coming together really slowly, that won't get done here but today I did this little weaving for it. L to R: twisted cooked paper mulberry bast, waxed abaca paper, dogbane bast, twisted milkweed paper, safflower-dyed hanji, marigold-dyed milkweed paper, hanji twist 1, hanji twist 2. 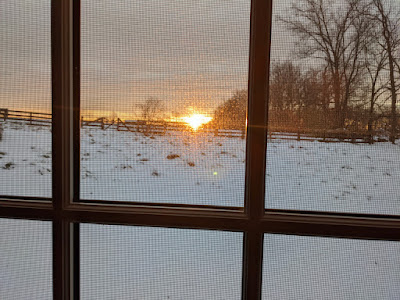 I am obsessed with this sun and it has not failed us since we've arrived. We marveled about it last night at dinner and it reminds me that we each have our personal experiences with stars, milkweed, hemp, whatever, and they feel so unique to us. But then across the board, anyone with exposure to these things has some similar experience, and who am I to assert mine as The Way or Better? Imagine if we stopped doing that. 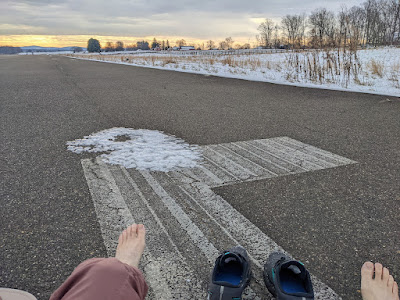 One morning I walked to dump the compost, cut into the woods, and then walk to the airstrip. I hadn't planned that when I first left, so I didn't wear boots and had to run through the path to the airstrip, which was deep snow, so that I could match the stride of whomever had walked it prior with their dogs. Once I landed, I took off my shoes and socks to dust off the ice/snow and feel the weather. Then it started to rain. 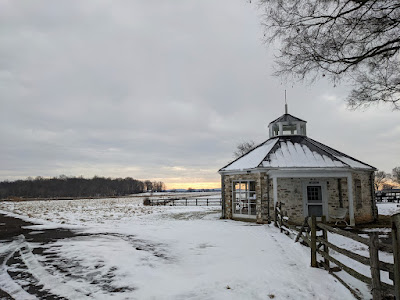 But the airstrip is so long that by the time I got a ways down, closer to the airport waiting room (now a studio), it had stopped raining! 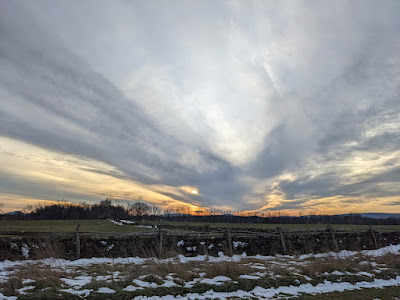 Today I took a brief walk before making dinner, scared away a bunch of deer, looked at more walnut trees that I hadn't noticed until I saw husks scattered all over the ground, and watched a few birds. 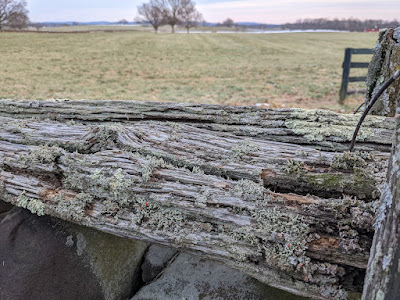 Tomorrow we'll learn about the lichen drawing artist but her comments at dinner last night made me look just a little more closely. 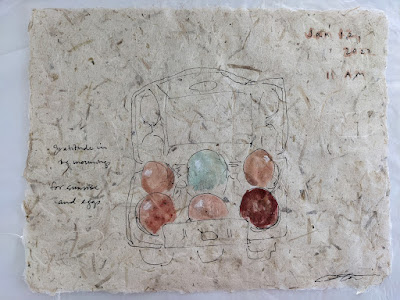 Fantastic diarizing. (Yes, it's a word, I just made it up!) It's wonderful to be on this journey with you, it's like being on my own residential fellowship. Thanks for your generosity.