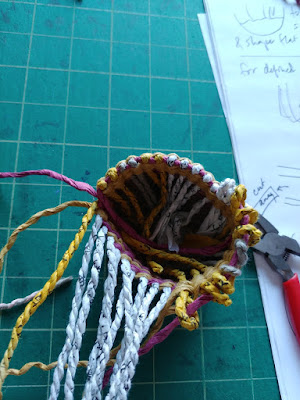 I'm getting worse and worse at sticking with tasks and seeing them through because my attention span has gotten woefully short and there are too many tasks. This was something I had started last year as a teaching guide (I have to always make a piece identical to the one my student is doing to model the right stuff) and I decided to test a new lid for it. 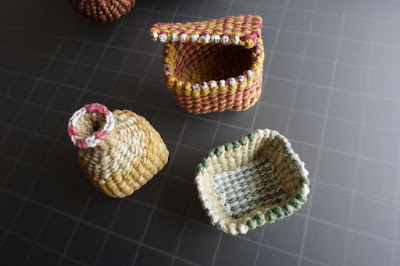 The lid surface worked but I still need to finesse where it comes apart from the body of the basket. I also took the handle off of the striped bottom basket and took up the walls of another square bottomed piece. All of this was very satisfying. 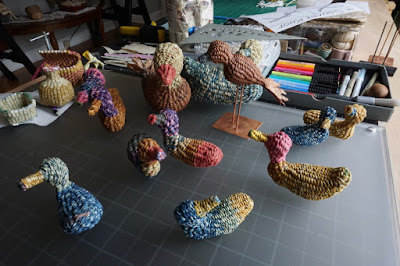 This month was all about new ducks. The first two went immediately to a new married couple and a few more will go to homes soon. The rest was me playing with cords from last year's big dyeing and installation work, because I love to recycle my own work. 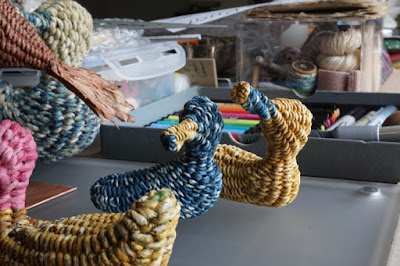 I leave very soon for my NYC teaching and seeing family, which is especially exciting as it has grown by one healthy baby niece. She arrived last week, another excuse for my already sad attention to be diverted from work. My printer also decided to die and the brake light in my car went on for a bit so there was a lot of that kind of time eating, but I tried to reclaim some of that today by making 80 cords and laying out a new how-to book on jiseung (this is my millionth stab at this book, let's see if it finally materializes!).
at February 24, 2020 No comments: 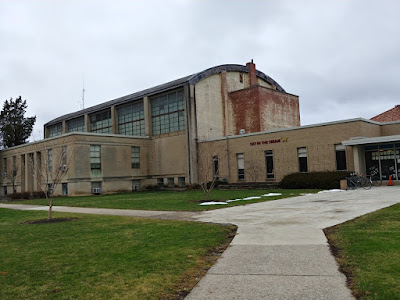 For the first time since 2013, I took the time to figure out which windows on the outside correspond to the paper studio inside. This old gym houses a performance space/cafe, bowling lanes, art spaces, and a million organizations/groups that range from aikido to steel drum to brass musicians to fitness to theatre and who knows what else. It's slated for demolition but no one knows when. Hopefully not soon. 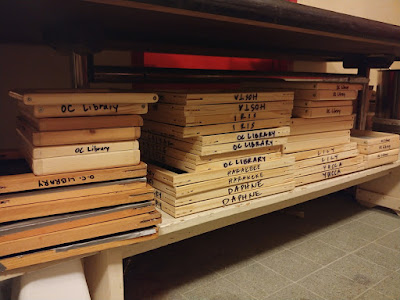 Here are the student tools, both sugetas and moulds and deckles. I repeated the tool cage of grad school tradition where paired tools are named after plants that are good for papermaking. 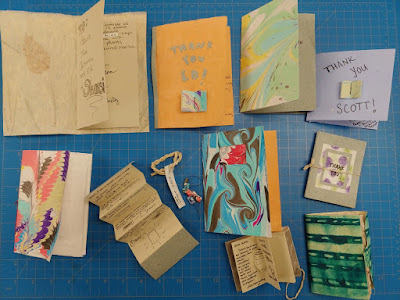 One of the final activities of each class is making thank you notes for all of the people on campus who make this course possible. I may be old fashioned, but I think that this is a very important practice so I like to assign each student one (or two) to make, and then we pass them around to sign collectively. 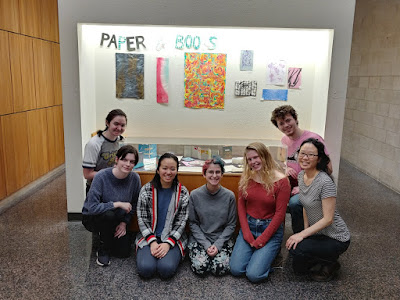 This was our group photo on the last day in front of the exhibit (we had to reduce number of cases and change locations this year and I got kind of lazy arranging the front but that comes from peak weariness + juggling too many things to do all on the last day). 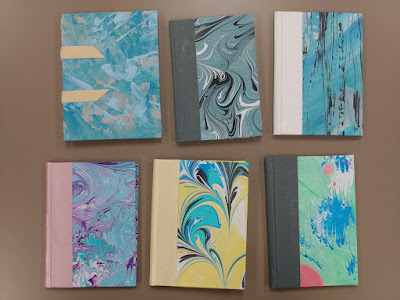 These are some of the books that came out from under the pressboards after drying, with covers made from marbled papers and paste papers that they had made the prior week. 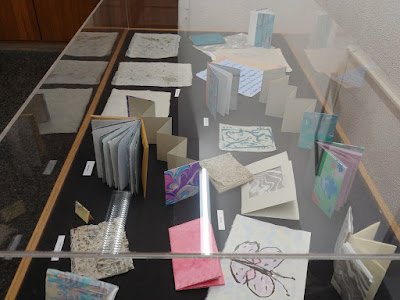 Instead of having two people per case as in prior years, one student suggested that we try to fit samples of each student's work into each case, so there should be work by six people in here. 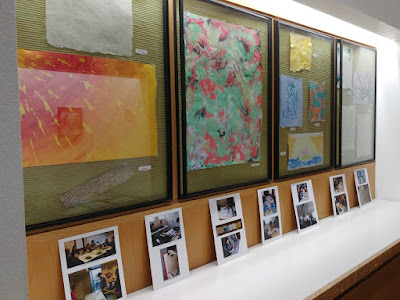 We've never had this type of space and it took a while to arrange, but thank goodness for all the eager hands and for Ed's speediness in printing out and mounting all of the pictures from the month. I know this has been over for a while but guess who has not had the energy to share it all until now? 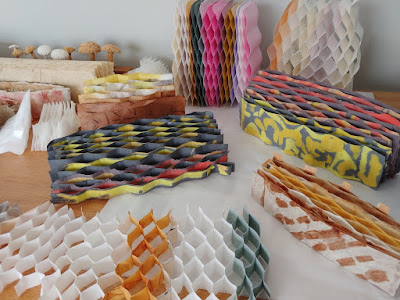 For the first several days after the intensive ended, I could do nothing but "busy" work. I'm no good at laying around to rest, so I rested by keeping my hands busy. Made more honeycomb paper, sewed up paper envelopes, pieced more paper scraps to cover a window at home for more privacy, reorganized things, cleaned the studio table. 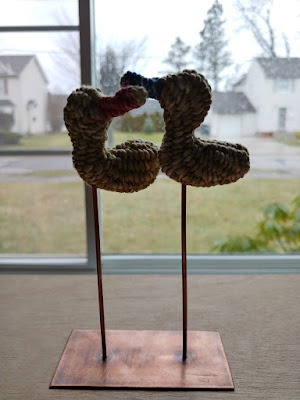 Once I got back to feeling somewhat normal, I got to the work work (aka paid work): duck commissions. This is for a couple that eloped unexpectedly rather than doing a wedding, so it came up faster than planned but I was glad to get back into the groove. There are about four and a half ducks more by now and I've been doing my best to pace myself so my hands continue to function. I conducted/gave four phone interviews, juried a show, dealt with "surprise!" home repairs that wiped out the latest sales, and only half-heartedly tried to get back into an exercise routine. Aside from that, days are calmer and I'm grateful for the solo time before the travel/teaching ramp back up in a couple of weeks. 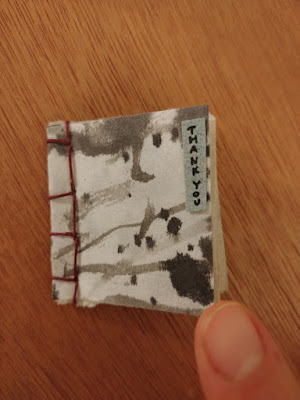 A tiny book with big and sweet sentiments. This was the book I got at the end with a contribution from each student inside its pages. The month was fully invigorating while also squeezing every last drop out of me, so it all balances out in the end. I hope that my students learned as much as I did!
at February 12, 2020 No comments: