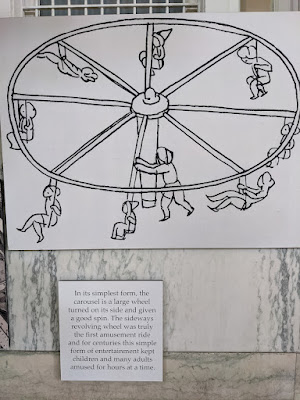 This may be the longest I've gone without posting, because I was so unreasonable with myself when booking my schedule before I left for Korea and while away. Too many obligations, no down time from a very important trip, and then lots of zoning out while visiting family for the first time in a while. Right before the fall semester began, I was able to have a visit with a friend in Sandusky of all places, where we visited a merry-go-round museum. This is a diagram of the first likely amusement ride, people on swings going around on a wheel together. 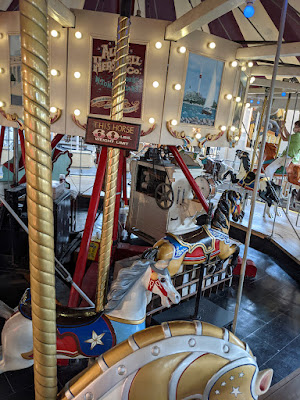 Included in the price of admission is a ride on the central carousel, which is in the middle of an old post office. I was going to get on that little horse until I saw the weight limit would require me to saw myself in half to get on. 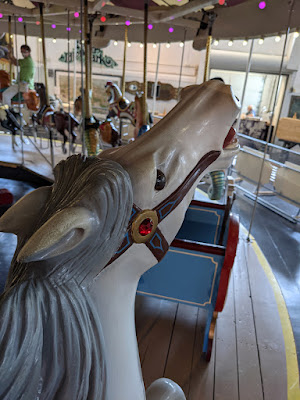 So I mounted this one instead, which turned out to be the lead horse. As my friend said, this ride was completely worth the price of admission. As soon as it started, I had this rush of all worries and regular life disappearing instantly while getting flooded with a sense of innocence and childhood I haven't felt since I was last on one of these. And back then, it didn't mean as much because there wasn't so much crap to wash away while whirling in a circle. We even got wooden pennies to drop into the box before climbing on. 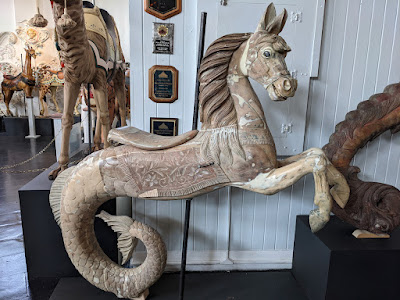 I never thought of all the fantastical creatures that normally were on these rides but they are wonderful. 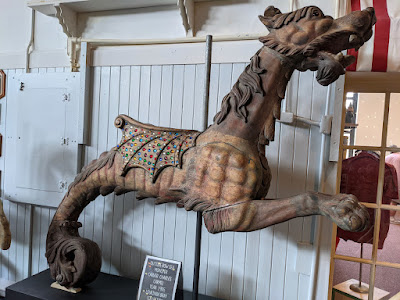 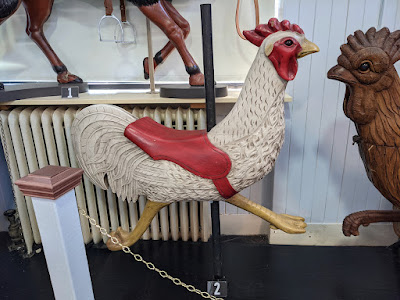 In a separate corner from this was an ostrich, and assorted other animals. 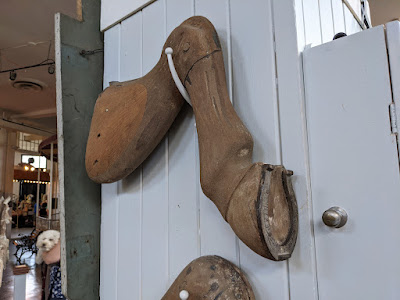 They even had horseshoes?! 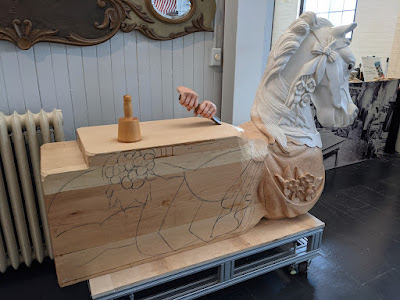 There were two blocks of wood that looked like this, complete with disembodied hands working on the piece (and both sets of hands of course had wedding bands on the left hands). There's a guy in the back who makes stuff as well. I thought about my grad school advisor who as a side job would restore pieces like this because she was an expert painter (they require many layers of musculature and so on before even designing the surfaces). Once she earned enough money doing that, she would quit and live on that money while making art. The cycle began again when she ran out of money. 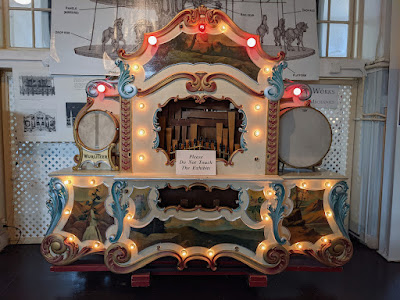 They have real organs as well for the music and this one they can play for you at request. It almost seemed louder than the one on the ride. 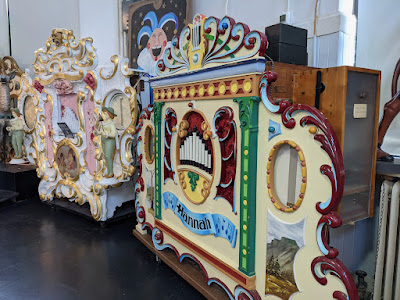 A couple more, with elaborate decorations and painting. 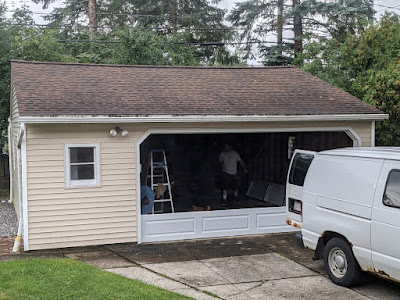 As soon as I returned from Korea and then New York, I had to deal with very stressful and invasive home repair projects. My garage door finally had enough so I gleefully replaced it and wondered why I didn't do it sooner (still learning as a home owner when it's better to pay a lot of money upfront rather than piecemeal over time). Should I have asked them to leave the almost new torsion springs that I had paid for them last year? Probably. Did I? No. Does the garage have a zillion other major problems? Yes, but I can't replace the whole thing so this is it for now. 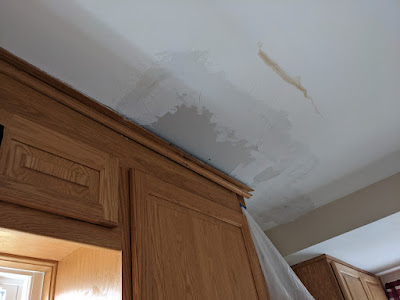 The most pressing issue started my last week in Korea: a leak in the kitchen ceiling. When I got home, it had stopped, but when I finally got home for good from NY, it started right back up. Fortunately, the plumber came out the next day and right where the leak looked the worst, he smashed a hammer into my ceiling and there it was. A failed fitting. But because of a weird re-routing of the water upstairs, we put in a new line and cut off the old one and then there were two holes in my ceiling plus yanked-out trim. Thank god I was smart enough to buy a house near a friend who is extremely handy and good natured, so he came over to help patch the holes. We still have several more visits left to get it all done to the point where I can use my entire kitchen, but I'm relieved that it's not a job that requires getting home insurance involved. 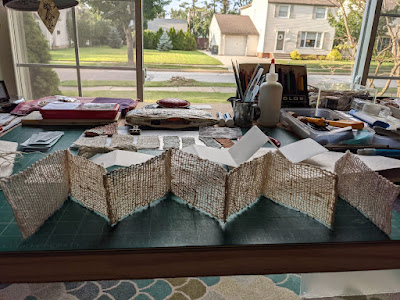 That, on top of getting my first ever lawnmower and learning how it works (battery powered), has kept me from being able to officially apply for occupancy and move into my studio. Still working from home but I would barely say that. There is so much I want to make and do but instead I have to keep my house from falling apart while starting fall semester teaching. Which feels harder than ever, because I am so desperate to have my time to myself. 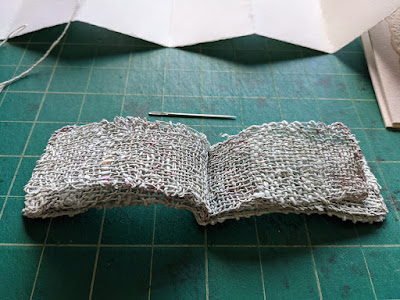 What goes into these little books? Still sorting it out but relieved to have gotten this far. That's a big step from what I thought was going to happen to them last year. If you want to learn more about manipulating paper like this and in other ways, and are local, I'm offering a museum class in Cleveland (search for "Asian Paper Craft"). For the first time, a class over four weeks, very leisurely! 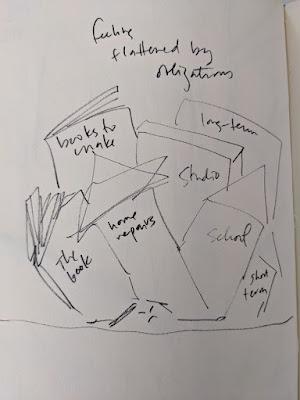 This is how I have felt for a long, long time. Not sure when it will let up. I'm fairly certain the only way to change it is to change how I am thinking about it. I also feel like I am in a years-long process of weeding away things I don't want to do anymore. But certain contracts were signed a while back so I have to honor those. Trying to be patient about glacial change as the world seems to be crashing and burning all around us.
at August 31, 2021 2 comments: 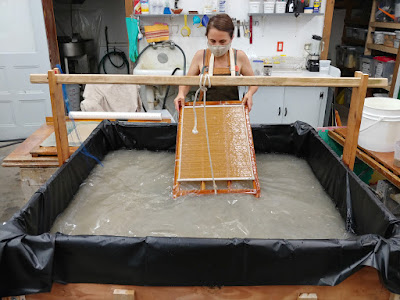 Another hanji vat has been born, this time in upstate NY at Women's Studio Workshop! Woody built it to my specs and of course improved it because he has been making stuff forever: equipment, tools, jigs, and so on. This liner is so much more manageable than the one I have back home so I learn every time someone builds a new one. Last week I had a lovely class; here is Amanda at the vat. 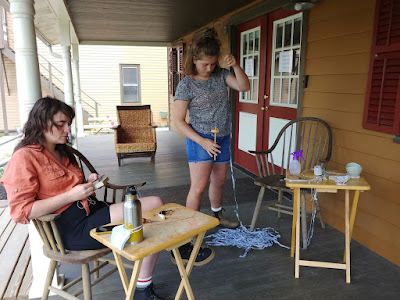 We lost a lot of enrollment because of positive Covid tests but the remaining students were excellent. Megan is weaving with some paper thread and Marissa is spinning more. I was so glad that my family was able to drive up in two batches the day before I started to teach as we hadn't seen each other for a year and a half. The itty bitty baby I saw a week before lockdown is now running around and we are all older. 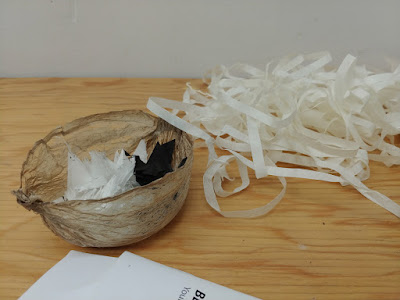 Megan cast this lovely bark lace bowl out of cooked paper mulberry bast fiber and used it to hold her hanji scraps from the week. I'm glad to be back with my parents now and have been intentionally staying with them more than going out (for many reasons), which is a big change from my usual behavior in NY. But I had a nice group show up for my online talk on Wed, which you can I think see here for a couple weeks before it is posted online.

Sunday afternoon Eastern Time, I'll offer a 1.5-hour demo-based jiseung workshop so you can see the steps from cutting a sheet of hanji into strips, cording it, starting a circular basket, and finishing it. You don't have to prepare anything as I recommend you watch first, which will give you a sense of what is going on, and then I will provide the info for what tools/paper to order.

Have a safe weekend!