Taking pictures of your kids 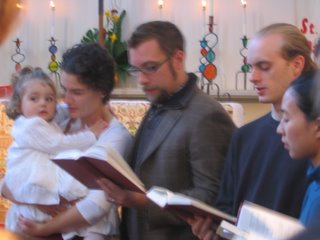 I just downloaded my movies from Oriana's baptism from Sunday, and remembered the funny conversation Shawn and Chela had at the Chicken Coop at our last dinner together. I was talking about artists who have kids and then use their kids to make their art, and how I didn't really like that. Chela said, I'm going to document everything when I have kids, etc. and then Shawn said, "Chela, taking pictures of your kids when they're little is called taking pictures of your kids when they're little, NOT documentation." HAHAAAA. Good times over salty burgers, ribs, and pale ale. 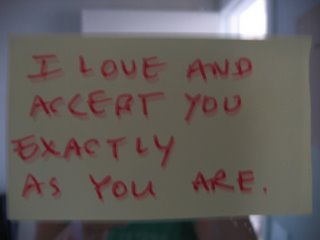 I got to Omaha yesterday just fine except that Bemis was closed. I walked around a little w/half my luggage (the other half I left on the access ramp) to try and see if there were other entrances, and then luckily a man walked up and I asked if he worked there and if he could let me in. He took my biggest bag and then I asked what he did there, and it turned out he was the executive director. HILarious. He took me up to Rory's room, told me to apply for the residency, and said, "how often does the executive director meet you at the door?" Rory has been another incredibly talented host. We had good talks, I got to see how his projects have progressed since September when I met him, and we had pears and tea and drew a lot last night. AND we did bunny shadow head night at an undisclosed location in Omaha, courtesy of Rory.

I had strange dreams about my family, dusk, diversity training, and climbing in tight but dangerous barn rafter spaces (only this time the timber was all new instead of old). But I slept well, showered, and had blueberry pancakes. The flight is delayed. The weather here is glorious. We'll hit thrift stores before I get to the airport. I hear Chicago is gloom and doom, but here I come!
at November 07, 2006 1 comment: