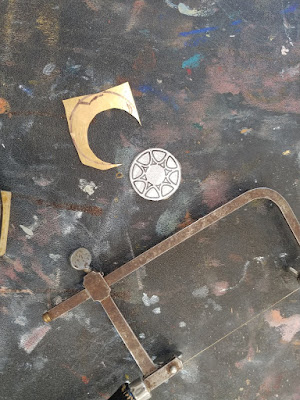 I started a jewelry class a few days ago and started to saw brass, 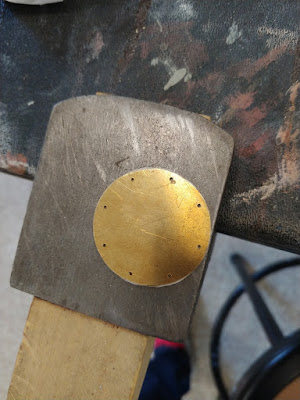 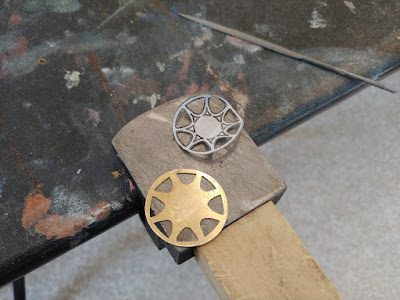 and cut some more. Even though I'll be missing a few classes throughout the fall, I wanted to try something new, material- and technique-wise. Also, being a student is a total luxury! 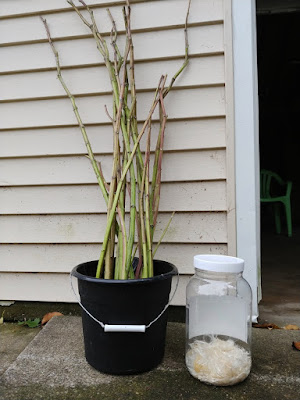 Melissa reminded me about harvesting milkweed after the equinox, so I had a ridiculous session of rushing over to a paper conservator's garden in the pouring rain to cut down almost 20 stalks. The yield is tiny but here we are, even a bit of coma! I'm drying the scraped bast fiber now and starting to pack for Penland—a one week class making paper with some of my favorite people!

Before that, I've scheduled another harvest and other things (PT, being a student, being a teacher, prepping for shows and workshops and whatnot). Friday, I'll give a lecture on hanji (that includes free pizza). Let's hope that I'm ready to leave the following morning!
at September 30, 2018 No comments: 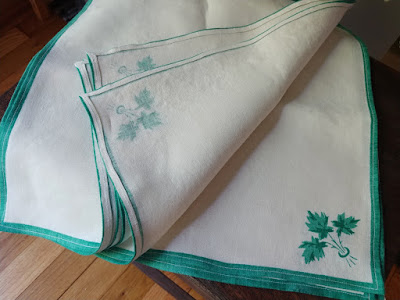 Now that my schedule is broken up into small pieces with teaching, PT, and all the pieces flying around, I don't have the stretches of time I usually like to have for making work. Yesterday afternoon I spent a while cutting up an square linen piece that I bought in 2010 in Northern Ireland that was clearly marked to eventually become nine napkins. I used it as a table cloth for years while waiting for a time when I'd actually be ready to cut the whole thing up. After weeks and months of wanting cloth napkins for my house, I realized they were here already! Just not in their final form. 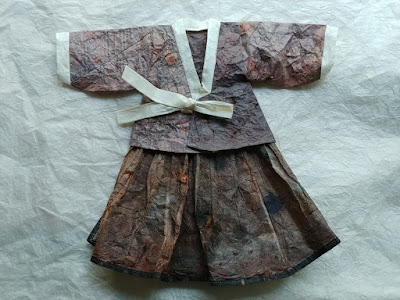 Last night I took a Korean art fellow from the local museum out to dinner, and had a lot of beef for the first time in a long time (I've been off it for a while now for a bunch of reasons, mostly that my body is not really built for it). I had a hard time sleeping and even did some sleepwalking that I have no recollection of but saw the effects of (no injuries, just wide open windows). At 4-something, I worried about old things I hadn't worried about for a while. At 5am, I got up to start doing something. After doing some prep for my class tomorrow, I finally finished this dress! It had been in pieces for months and I'm relieved to finally have it done. 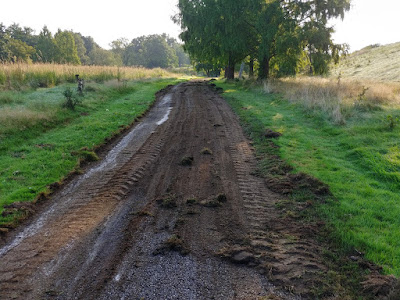 I still get scolded at PT about a lack of exercise, so I tried to walk at the local park nearby, only to find that there was a massive construction project that is going to pave and regrade walking paths. A sign would have been nice. I also wished I had a wheelbarrow so I could take this torn-up grass turf home to my yard, which has lots of languishing grass patches (probably because I never water anything). 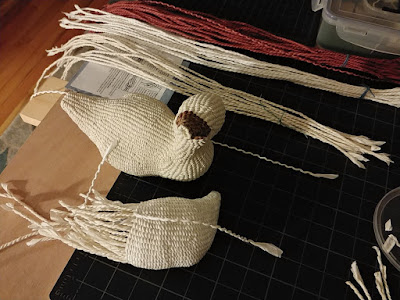 The old duck is supervising the new duck birth. I am trying to take my time because, again, I get lots of scolding at PT about how my work wrecks my body. Also, things hurt! Lots of breaks. I forgot to share this lovely review that one of my book dealers wrote about my latest book, which is almost sold out. I've been so honored by the collections that have chosen to buy it, especially after hearing about a very special donor for one of the later copies. 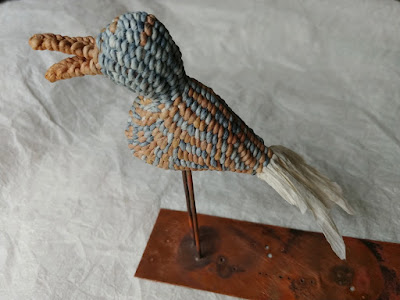 I finally made a duck for this funny stand that I've wanted to use for a while. Done and done! Two more jiseung pieces in a the works: another duck, and a vase based on one I saw in the Korean gallery at the art museum last week. 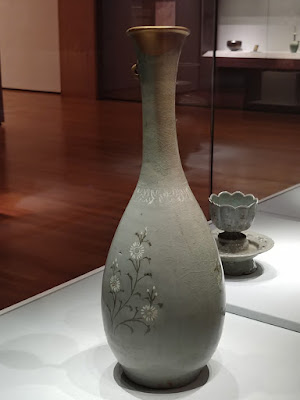 I doubt I can get it as perfectly tilted as this one (and that could have been a mistake, who knows!). 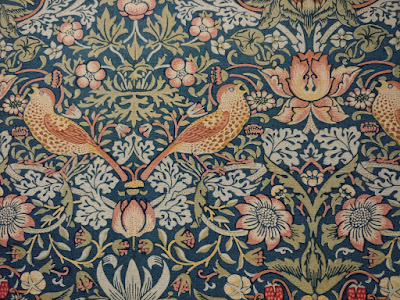 I also went to see the William Morris show. The background wallpaper and faux rug on the floor were a little bit overkill for me, but otherwise I loved that textiles and books were all in one show. 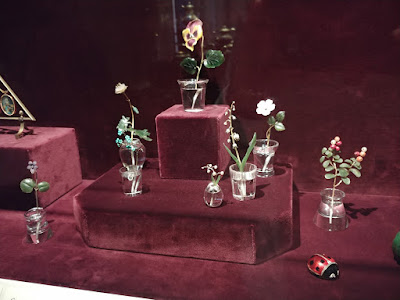 The Fabergé and Tiffany galleries apparently had been redone a while back, so I stepped in and loved the Fabergé crystal 'water' in these tiny flower pieces. 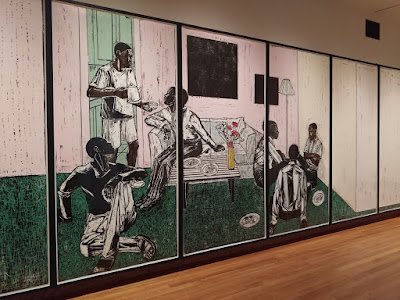 In April, I had seen the Kerry James Marshall mural on the back of the Chicago Cultural Center. His show here was not as big but given the size of the gallery, this piece made from giant woodcuts was monumental. 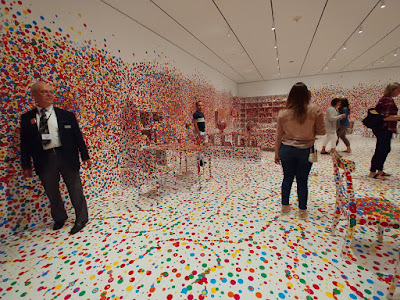 My timed ticket for the Kusama show was the last slot, which is why I had plenty of time to see what else was going on in the museum. What else, besides locking myself out of my house 2x in less than a month and learning about the gunk that builds up in washing machines? [1. Thank goodness for friends with spare keys and 2. Ew!] One of my book dealers wrote a very thoughtful review of my latest artists' book. It's always a gift when you know someone has spent a lot of time handling, looking at, and reading your work. Thanks, Alicia!

Before I forget: the closing reception for my solo show at the Orange Art Center is this Friday (along with pretty much every other opening in town)—see you for the artist talk and refreshments!
at September 11, 2018 1 comment: 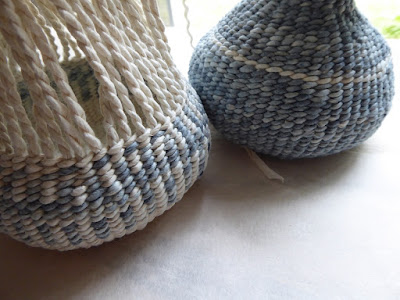 I got started on these baskets last week or maybe a little before that. I'm still not done with the second one but am going a little crazy not being done, so I may stay up doing that tonight. I've been sidetracked with the start of school, which means getting a zillion documents ready. Not only the syllabus, but bibliography, resources, handouts, assignments, projects, books to pull from the library ... it's amazing how challenging it can be to envision the best way to get the info in my body into other humans! And soon, I'll also be a student: in a few weeks, I begin a jewelry class. Very excited to learn a whole new set of skills with materials foreign to me, and enjoy the luxury of being a pupil. 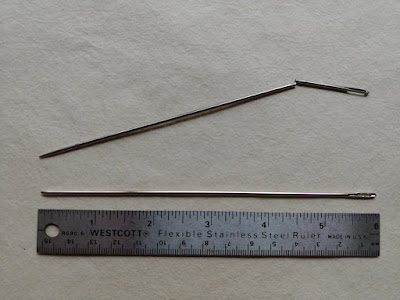 This is sometimes the downside of teaching. I had this needle for years, and it got left behind in a class. I foolishly entrusted the site to mail it back to me, warning them to tape it to a board or something (I thought everyone also knew that you could go to the post office to hand stamp these things rather than sending through the machines, but I assume too many things). It arrived broken, but thankfully, Velma had mailed me a good needle so that I could keep working. I also reached out to my tool contacts for advice, and a bunch of new needles are in transit so that I have options when I teach, rather than letting students use my tools. I still have so much to learn!
at September 04, 2018 No comments: