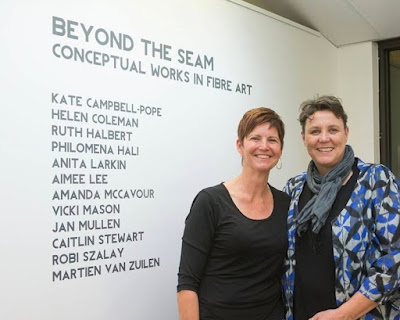 The wonderful show I am part of in Western Australia opened recently, and here are the masterminds behind it: Carolyn Marks (who is an arts officer for the city of Mandurah, where the show is sited) and Martien van Zuilen. They worked SO HARD to pull this show together in a very limited amount of time. I'm honored to be part of it, with a selection of hanji work, and to join these fine artists, some of whom I was happy to meet last year in Australia. 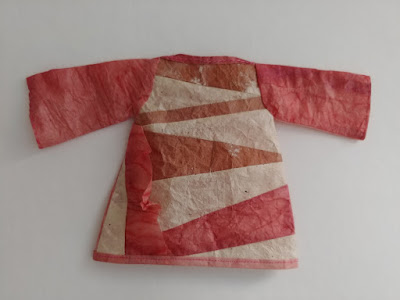 Meanwhile, at home, I am finally getting rolling on new work. I finished this last night even though I could barely see at that point. The hard part is that my body says, STOP! but once I roll into bed, my mind keeps running for another hour or two. Someday I will sync them up. 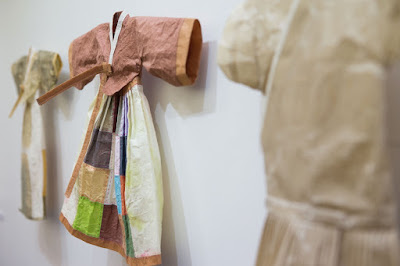 Here are three of my dresses in Western Australia; lovely photography and thoughtful install. I've been so distracted with learning the balance of homeownership and have to remember to be kind to myself because there is so much I don't know, and there is so much to learn each season. I saw the house in winter, moved in during cold/wet spring, and now it's real summer weather. So many things involved in each cycle! Wildlife, insects, trees, grass, HVAC, all of it. I used to not really live that cyclically even though I believe very much in seasonal work, because I lived in an apt that roasted me in winter. Overheating = no need to real winter clothes/blankets at home = not a lot of laundry. 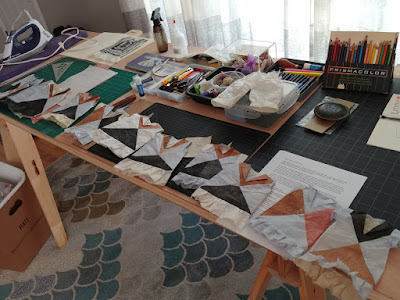 I wasn't sure what my book edition would need but finally finished all of these little dresses, each going into a book. Last night was the first when I panicked about the reality of less than two weeks until I go back to Australia: will I really be able to edition this book? Yikes. 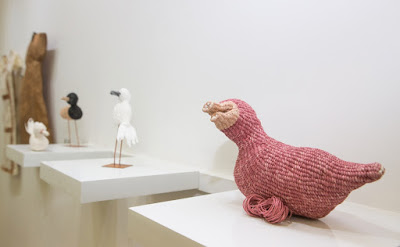 I couldn't figure out a custom stand in time for this funny duck so I sent a bit of paper string from Paperphine. I should have been working on more ducks but I am being pulled more strongly in the direction of books and dresses because that's what the shows and dealers want right now. Well, that's not really true because the dealers ALWAYS want the ducks, but I can't keep up! 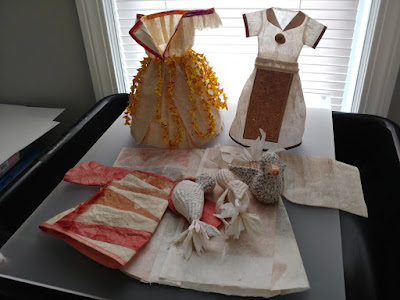 Three new ducks, four new dresses, finally getting ideas manifested that I've had for years (as far back as 2001). Still living in a state of disarray but half the dining room table is set aside for the trusty Kenmore, and the entire living room is a studio. I have been indulging in the almost brand-new central air in my house, which feels incredibly decadent, and trying not to eat too many crunchy foods (apparently this is what I want—which is true!—but it causes me to get too much into the air, when I need to be more grounded). I returned to my acupuncturist to deal with my ongoing issues with too much fire in my system (again, it's how I'm wired) and it's calming down a little. It's perfect timing to be going to Tasmania to immerse myself in WATER and make paper with new and eager students.
at May 31, 2018 2 comments: 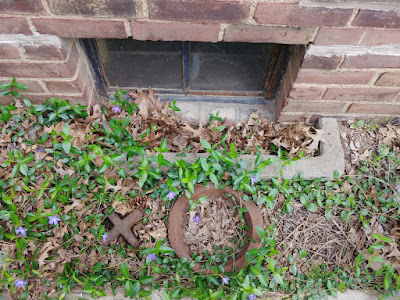 I'm finally feeling a little more hopeful about being able to get good work done at home. I keep moving around my numerous sawhorses and door blanks and vat pieces to rearrange work surfaces as I learn the limitations and potential of each given space + how well I can work in each. I wish I could have concrete window well bits like Angela does at home. But I still haven't been able to deal with any of the landscaping (to solve water problems), so this is still far from reality. 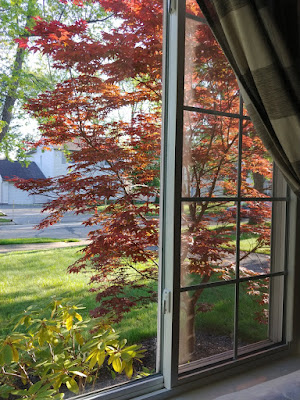 The rhododendron has been unhappy since I arrived, but the Japanese maple leafed out to be the most beautiful thing on my property! This will be good motivation to get up early and work in the front room when the light is best. 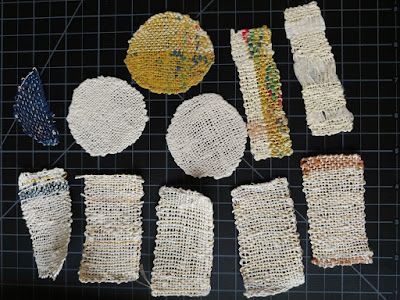 Yesterday I released two of these from failed embedding in paper and made four more so I could include them in an edition that hopefully will be done in a couple of weeks. I realize I may only have physically started to put it together now, but it has been years in the making. 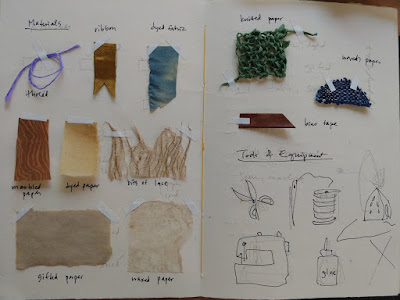 Rough sketch of one spread that will obviously be my favorite. 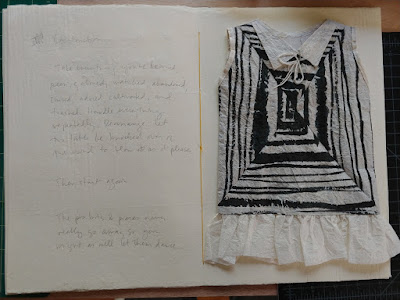 And another one later on. So many wheels finally turning! Just in time, as I have less than a month until I travel around the world.
at May 17, 2018 3 comments: 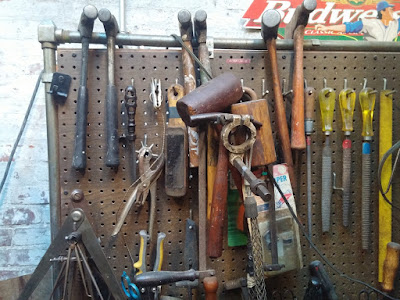 To spare us all the boredom of what is going on in my house-addled life, I thought I'd look back on past mid-Mays. Last May, I was working in NYC and visiting David Reina's shop to conduct interviews for my book research. 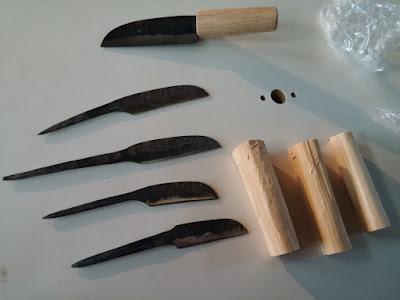 Two Mays ago, I was getting ready to go to PBI (where my dear friend Velma will soon be teaching, alongside so many other beloved colleagues). Before leaving, I was able to look at Shanna's knife prototypes (see? Even before I knew the second book would be happening, I was getting nerdy about tools). 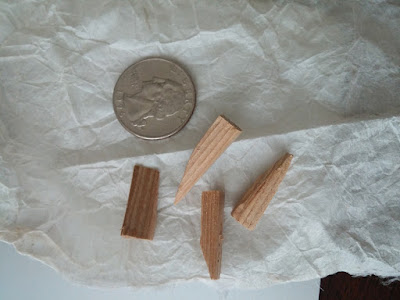 Three Mays ago, I was dealing with large hanji vat repairs, watching a new hanji vat by Julie being born from a distance, and looking at the wood pieces meant to wedge into my large hanji bal teul. 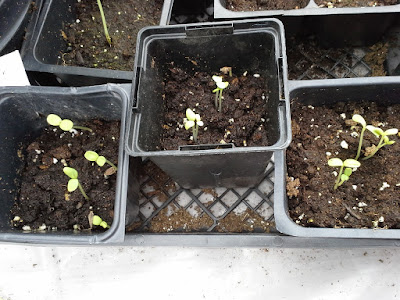 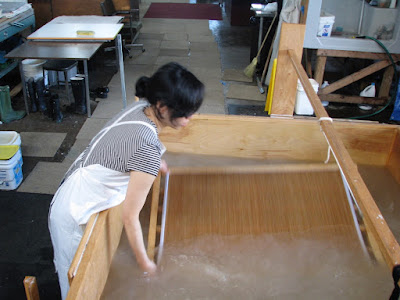 Five Mays ago, I was still living in New York but happened to be in Cleveland for big vat training and teaching. It's a relief to look back and see how much I've been invested into the paper world all this time. Often I feel I work enough because I'm caught up in endless admin. Right now, I'm still working on my milkweed book. To be reasonable, I should probably not expect to have it ready for sale until I return from Tasmania/New Zealand next month, but who knows? Anything is possible.
at May 11, 2018 No comments: 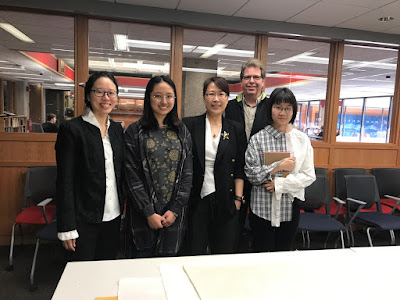 I forgot about my Oberlin lecture last month as it happened immediately after my move. Here I am with a couple of the students in the Book in East Asia class, the East Asian Studies librarian Runxiao (with the lovely brooch), and our wonderful Special Collections librarian Ed. A little bit of hanji in the foreground, and Professor Ann Sherif behind the camera. 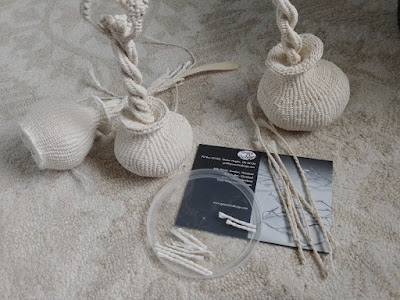 Here is the newest plant (laying down) with the first two as my guides. The second two are in Australia for the "Beyond the Seam" exhibit that opens later this month. I also dropped off a new duck to Still Point Gallery, where I got to meet Grace Chin, a local jeweler. Such a lovely afternoon. 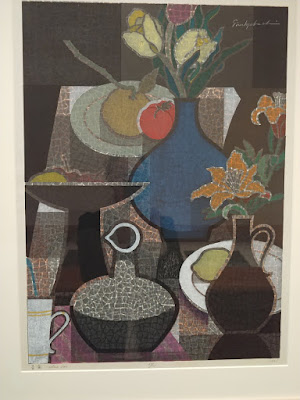 Though I am still consumed by the house, I am slightly calmer (emphasis on slightly!) and am trying to get back to doing a little work, my work. Fortunately, after my Oberlin lecture, I was able to see both the fabulous Rembrandt show at the art museum, as well as an amazing show of Japanese prints from the collection. The print above is Blue Jar (1965) by Mabuchi Toru (1920–1994).
at May 05, 2018 No comments: