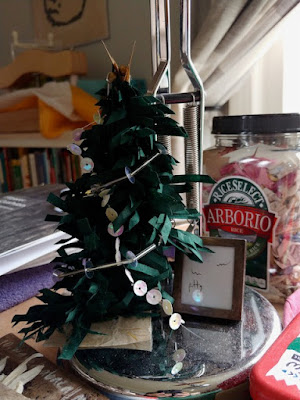 For my first holiday away from family (because I chose against travel to NY and instead had my first traditional Jewish xmas complete with Chinese takeout), I made do with a tiny hanji tree. I used the gift wrap for the gwi jumeoni kit that Youngmin sent, which is exactly the right color hanji, adorned with bits of beads and sequins originally purchased to shore up my paper brick wall. 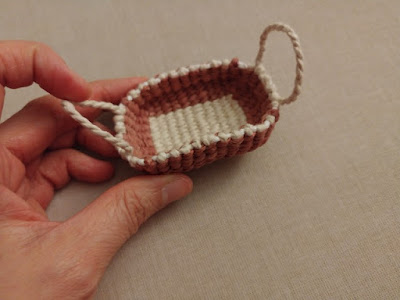 After listening to a panel critique my work, followed by a helpful conversation with an artist friend, I have been thinking a lot about my place in the world on all scales, as a human on the planet to a papermaker in the tiny but growing paper world. Maybe this is simply the time in my life when I'd naturally pause to consider what I have been doing and how I want to change in big and small ways. During this pandemic-long pause, I've discarded a lot of "work" and become a survival chipmunk, jumping from one thing to the next, using hand activity as a salve for immediate feelings of doom. Most projects involve using up scraps. This is one. 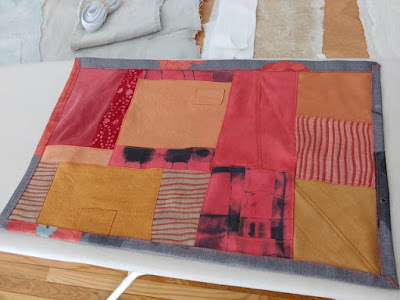 This is another. After over a month of eating at 2-hour intervals, I'm trying to wean myself off of emotional and disordered eating and instead sewing like a maniac. Mostly I see that being in a double limbo of panorama + Fulbright = not being able to focus on anything because people keep falling ill and dying and the research grant I had worked so hard for could dissolve. The latter is slowly winding its way to some kind of resolution, but still leaves me with no real dates to prepare for, which enhances chipmunk brain. Tidbits from that scattered mess:

Apply for isolation in the desert!

Mostly, be as kind as you can to yourself. My method today was to order chocolate oatmeal cookies online for outdoor pickup. Stay safe as we welcome the new year!

This place I am 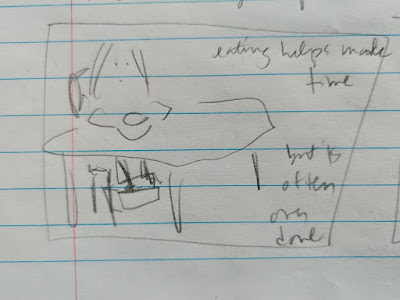 With the end of certain prescribed duties, I thought I'd be relatively gleeful about a brief freedom. But knowing I won't be able to see my family and how that imbalances our collective sanity + the dread of the next obligation being taken away from me (a grant that hinges on a visa that hinges on seemingly endless demands for paperwork that I've done already but have to do again) = a return to overeating, listlessness, and lack-of-purpose malaise. Fortunately, I have glorious friends who don't ride the same waves of depression as me, so when Karin mentioned how stunning My Octopus Teacher was, I indulged. I'm so glad I did, because it was quite gorgeous and moving. The cold and fear you feel when imagining free diving into a frigid and wild ocean made me think of Lisa See's The Island of Sea Women, though Korea and South Africa are far from each other.

But this direct contact with wildness, and Craig Foster's instinct to return to that source and be activated as yet another creature of nature, was excellent medicine. I was so incredibly struck by the bricolage of shells, the sound of them as they fall away, and the undeniable fact that wild animals are exquisite artists. This story of an octopus-human relationship began with observation of curious phenomenon, and I've returned to watch that moment again and again.

Today I listened to the first of a three part series on the importance of Mauna Kea and the movement to prevent further desecration of this sacred mountain, a place well above the sea in Hawaii that has a unique alpine desert ecosystem that exists pretty much nowhere else in the world. The sounds of the protestors and their songs had me in tears as I sat on the floor trying to get through another round of visa paperwork (of course, in my swirl of emotions around this app and all of the hurdles in getting back to Korea that the country itself has placed in front of me, I forgot one form, so this process is going to take even longer). 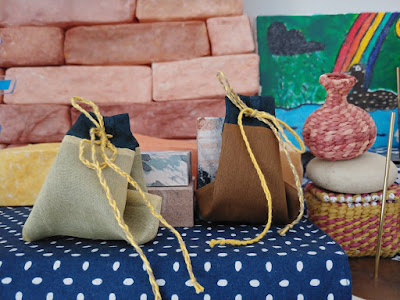 [I did some hand sewing of gwi jumeoni using silk and a pattern by Youngmin, and they are hanging out with so very many reminders of past travel, friends, art, and experiments.]

To recover, I drove out to get Korean groceries and paused to chat with the owner because I was so lonely for people in my parents' generation, immigrants who somehow got here after racist legislation was changed to allow certain non-white folks to enter. They missed home, and that's what I was looking for when ordering food from a nearby Korean hole in the wall. While Korean cuisine has evolved and continues to change on the peninsula, this disapora of a certain age continues to cook and serve food of their childhoods, of what they remember. Younger movers and shakers may complain about them being trapped in the past, but it's actually an incredible time capsule, and a temporary one as well.

After watching a brilliant concert last night by Zenas Hsu through Open Space Music (he'll perform once again tonight! I highly recommend!), I stayed to chat with a dear diaspora friend and met another, as we talked about how gangster Korean women of a certain generation are. And they had to be, to survive wars and famine in a country that was almost entirely bombed to bits. If old fashioned food gives them comfort, go for it. While feeling jerked around by their country's bureaucracy, I try to remember that that is exactly why I do the hanji work that I do: to create a place for myself that isn't unkind, a place that can celebrate all that I am and not freak out that the American name on my birth certificate doesn't match the Korean name on my family register in Seoul, a place that doesn't care about my flaunting of social norms expected of women who look like me, a place that looks instead at my relationship with the world through materials. To learn more, watch the artist talk from my show here. 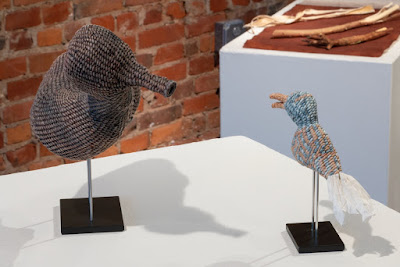 I wonder what they are talking about. Today at 5pm is my final "public" "event" for this extremely unfun year. The talk will not be unfun, though! Here's the info.

In case you can't handle any more zooming (I will never hold that against anyone!), you can watch a video of my portion of the show below. The video of Sarah Rose's part is in the link above. 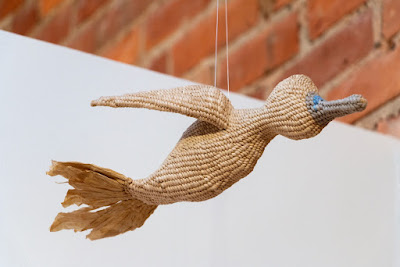 I forgot to share these videos of a conversation I had with Michael Verne, the owner of the Verne Gallery in Cleveland, about my artists' books made during pandemic this summer. Plant and neighbor focused.

Today was a slow day but I was glad to hear an interview with Cathy Park Hong. Reminds me of all of the authors and artists I want to reach out to, to say thank you for your work, for putting yourself out there in a way that helps so many of us feel seen.

Lately this is all 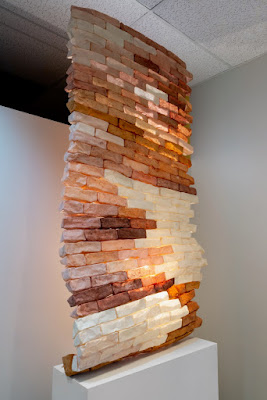 The old wall (2006), which I had wanted to just throw over the top of the partial wall, but was told go to ahead and suspend it as it had been built to do. The pedestal keeps it from being so obviously lopsided. I could have weighted the bottom to have it straighter, but I liked the way it rolls over because then it feels more related to Sarah Rose's work in the gallery directly to the left of this when you enter. 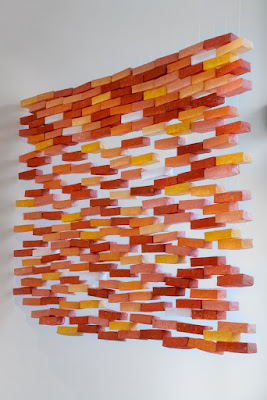 The new wall (2020), which was something I swore up and down I'd never do but in the end was the one decidedly new thing that required a daily studio practice that eluded me for most of pandemic. 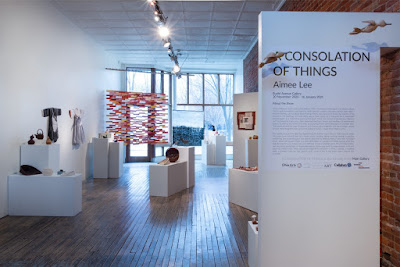 This is my bit of the show after you enter the Euclid Avenue gallery space and all of the gallery shots were done ably by Jacob Koestler. Documentation work like this is very hard to do so I'm glad he pulled off a lovely group of images. 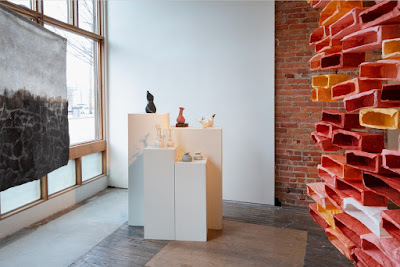 This is my favorite nook in the show, probably because this is where I spent the most time, with a ladder and step ladder, rigging the wall. 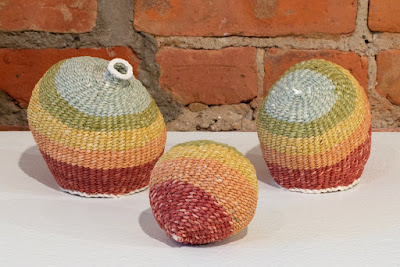 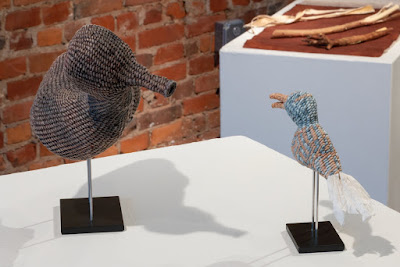 I made the left duck on a flight from Australia back to the US and it came out so much weirder than my other ducks that I had a custom stand built to properly hold it up. After a couple of rounds of dyeing, it has grown on me a lot and the wee one seems to be having a good time with it. 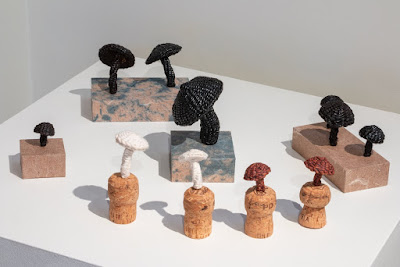 Mushroom stands ranging from very easy to a lot more work. The mix is: uncoated, persimmon coated, and then lacquered by Christine Puza. These are the gifts that keep on giving, after being inspired by woven mushrooms in the educational "touch" section of the Peabody Essex Museum in Salem. Sometimes the best places in these institutions are where all the kids are gathered and clamoring. 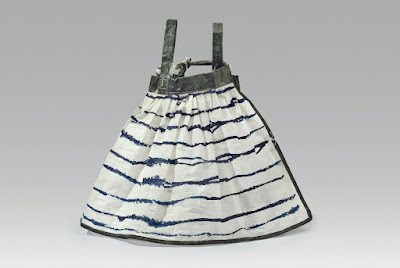 I have many compulsions and one is to always get rid of things. Declutter. After hanging this show, I was tired of the older work I've been storing. This one was carefully disassembled for the meat. 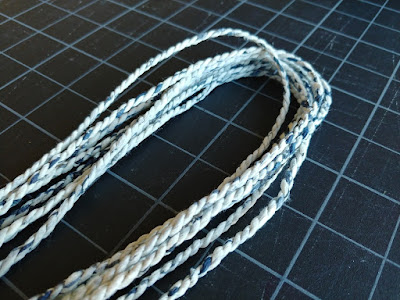 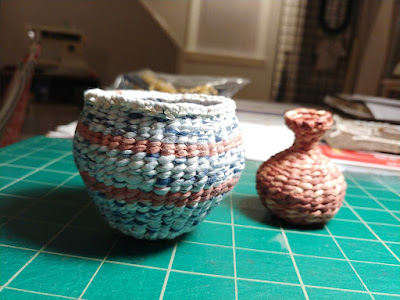 This is a nighttime shot so a big bleary, but the one one the left is what became of that little skirt. The vessel on the right was recycled from... 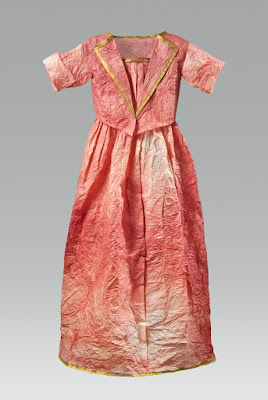 This one! Again, carefully taken apart for the meatiest bits (the jacket is still intact, I have to figure out what happens to that). 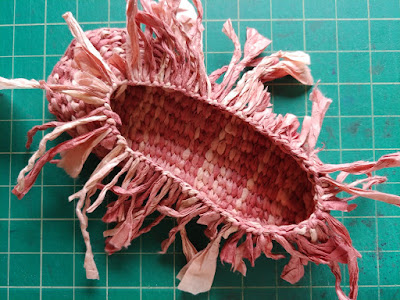 Much but not all of the skirt became this shoe. 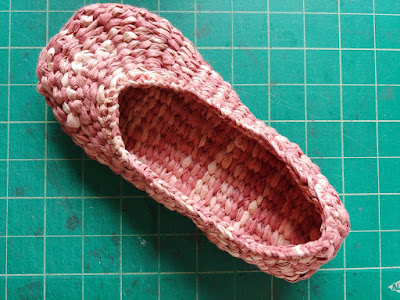 And even though I finished this after the show rather than before, as I had hoped, I am pleased. 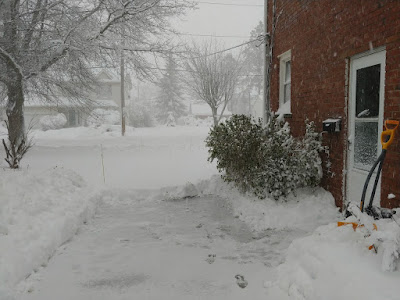 You can't see the driveway behind me to the garage, but I cleared from there to here before stopping for the day. Two hours of shoveling heavy snow and the wet underneath, plus carefully coaxing my shrubs to stop being iced and laden with snow onto the driveway. I pulled them up one by one and shook them, patting them and eventually hugging big chunks and hitting them against my body to remove ice and snow. Everything else is still buried, but I needed to not drive over the shrubs on my way to a video shoot at Oberlin the next day (there was more shoveling at night and the next morning). I'm still recovering from spouting the contents of my brain over a few hours to a camera.
On top of that, I was nearly scammed like this artist (I knew it was fishy from the start but ignored red flags until the very obvious one: "I'll send you more money than the cost of the art"), so I've gone into a memory bank of previous swindles. Finally, the process of trying to apply for a visa to Korea for my Fulbright research has been unfathomably fraught. I will write extensively about it later but for now, the fact that my Korean father was a Korean citizen when I was born in NYC means that I have to jump through A Great Many Unfair Hoops. So very many, so very unpleasant.
But you don't have to do any of that! Instead, you can join Sarah Rose and me as Lisa moderates a conversation about papermaking and art next Thursday at 5pm. If you attended the opening, I promise any video and photo documentation will be much, much better.
at December 04, 2020 No comments: