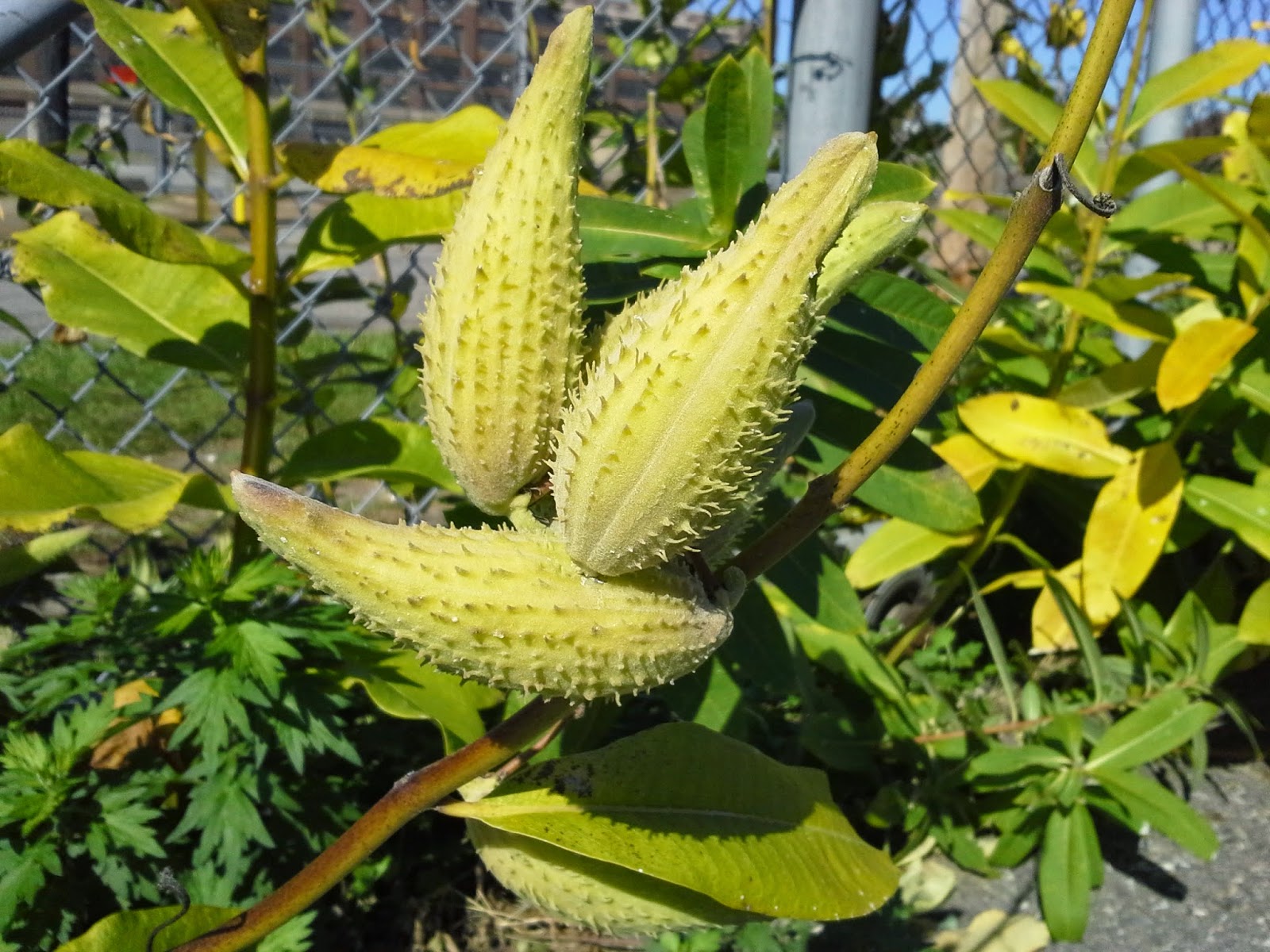 Though I will miss the abundant fall harvests this year, I was determined to do something to come home to: milkweed pods are now shoved into the freezer, alongside dahlias and marigolds and hibiscus flowers. I like to think in the dead of winter I can cook those pots and feel a little summer warmth.

I tried to keep my plate light this last week but of course it is laden. Nothing is packed and some folks seem to think that I'm at their beck and call until the moment I get onto a plane. But today was full of treats: a spinach quiche, milkweed, yoga therapy, a postcard AND call from Velma, a talk with a Chicago book artist, bringing my artwork back home, lots of changes afoot. My travel prep is boring, so I wanted to highlight two dear friends that I will miss while I'm away: Yuko Kimura and Pam McKee. Their work is even more exquisite in person.
at September 23, 2014 3 comments: 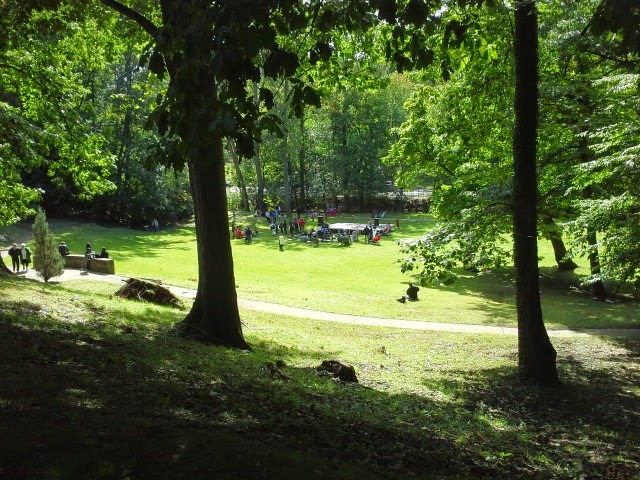 I took my first walk through the Cultural Gardens ever this past weekend to check out the One World Festival. It was a gorgeous day and I filled myself with delicious food from at least three different booths. I was a bit ashamed that it took me over a year to take the time to walk in nature(ish). I don't like that I have to drive to get to places to walk, and still have this dream of living the way I've done in past cities and towns: car for travel, feet for everything else because all the local businesses are close. 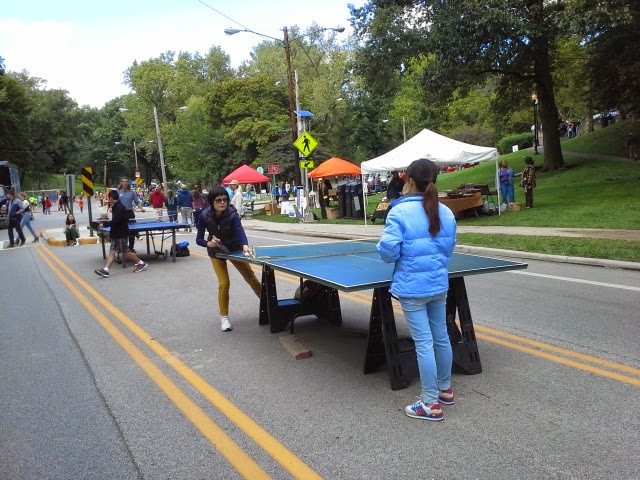 But soon, I'll be complaining about how sore I am from walking around so much and being on public transportation in Korea and Japan, so really, nothing changes. Today I finally got the rest of my root canal retreatment completed. FINALLY! I hope to never step foot into another dental office for the remainder of the year. I met with a friend this morning to get advice on traveling to and through Japan: I just found out last week that I was awarded a consultancy from the American Folklore Society to go to Japan while I am in Korea and research master/apprentice relationships at paper mills! Very exciting, though it adds a ton more prep to my already anxious plate. 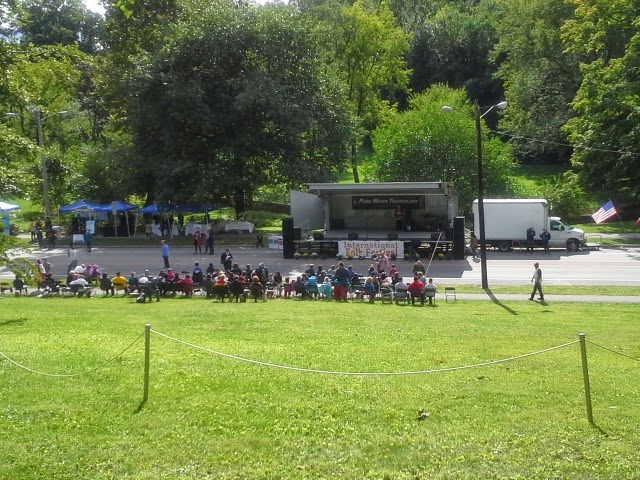 I enjoyed seeing small children dressed up in various ethnic costumes for performances (the Mexican dancers had not yet taken the stage), simply running through the park. I am sad to miss the fall harvests of papermaking fiber, which I was reminded of as Melissa talked about her daylily fiber. 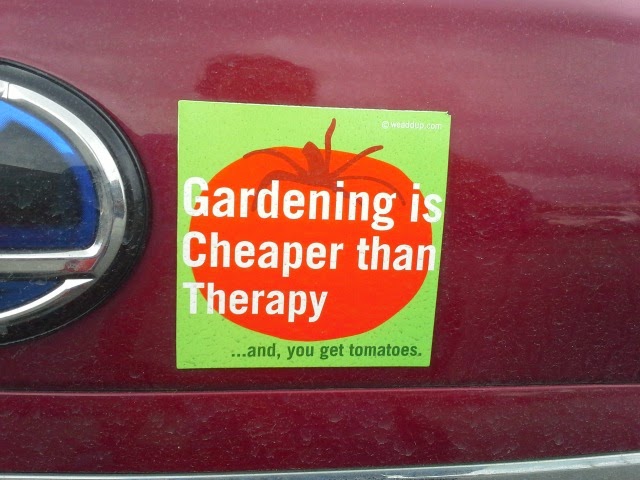 The biggest change is the season shift. It's very assertively fall, and I can feel it in the weather, the sun (and shortening days), the wardrobe, and the number of blankets on my bed. Very soon, I start flying again for what will end up being at least eight flights before year's end. Not quite cold enough to roast veggies in the oven (though I did make muffins last night for comfort), so chicken soup is on the stovetop to get me through the night.
at September 16, 2014 2 comments: 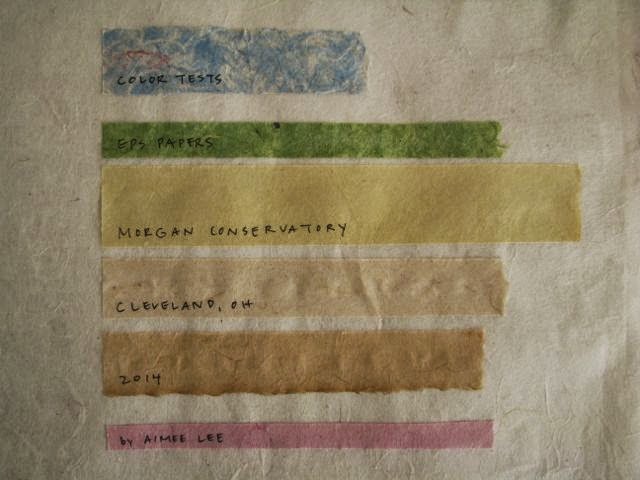 I panicked slightly as I looked at the calendar: only two weeks before I leave Cleveland! ACK. This was one of my Monday tasks, a big sample book of dyes and pigments on paper. 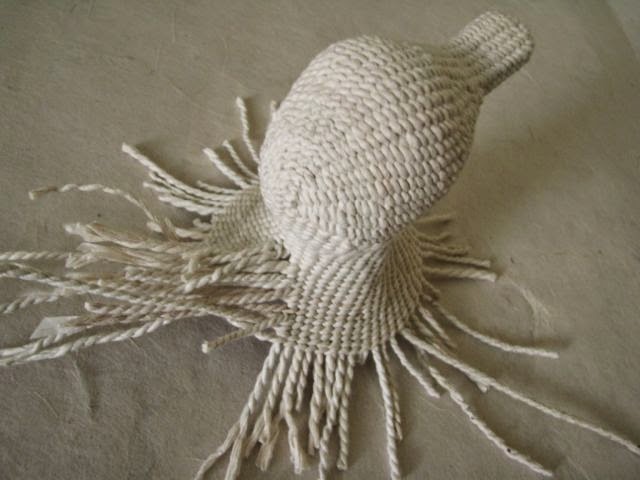 After fixing the back of the head on this second duck, I tried a new method of building the breast, using all of the cords from the neck rather than leaving some in the back untwined. 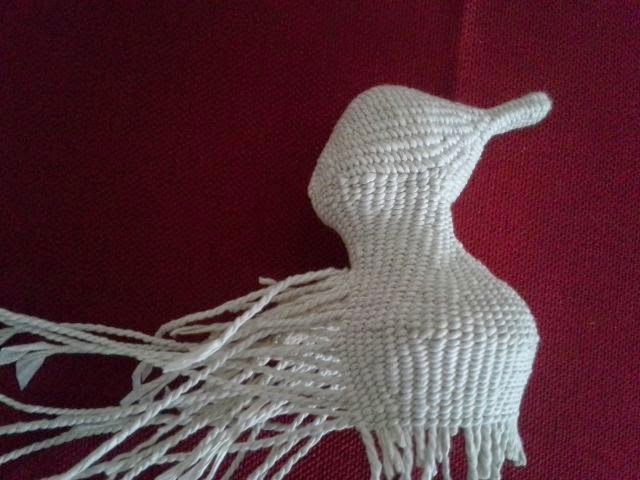 At this point, I had already fallen into deep despair because I brought the puff off the breast down way too quickly and didn't have the energy or heart to rip it out and start over. I figured the whole thing would be a bust. 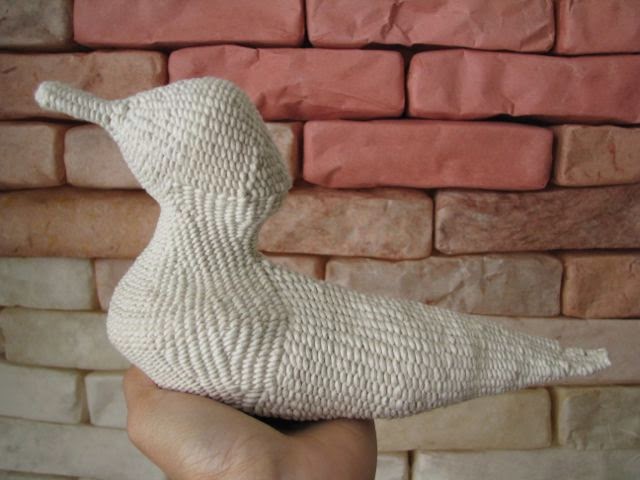 But it turned out okay! I mean, there are still major proportion issues (my heads are all too big, but MY head is too big, so it makes sense), but at least I kept the body on this duck longer than the first one. Posed in front of a chunk of one of my other old pieces that could have been a huge bust but somehow worked once it all came together. 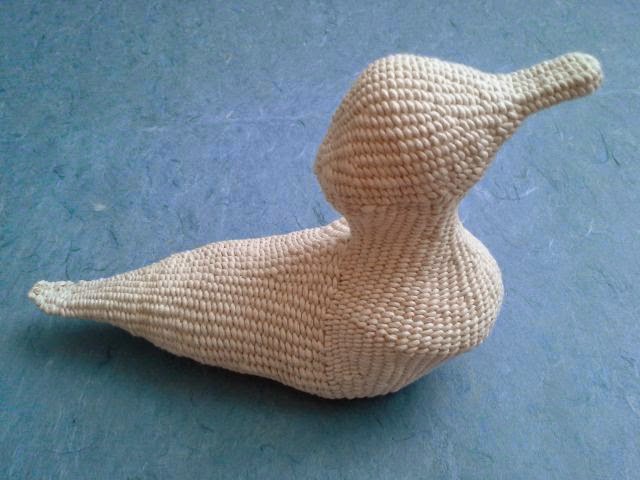 Swimming free!! Though it leans to the left (the head, and then it wants to tip over that way, never to the right)—again, just like me. Glad this is done before Korea. Now I have to make a billion cords.
at September 10, 2014 3 comments:

Close to the ground 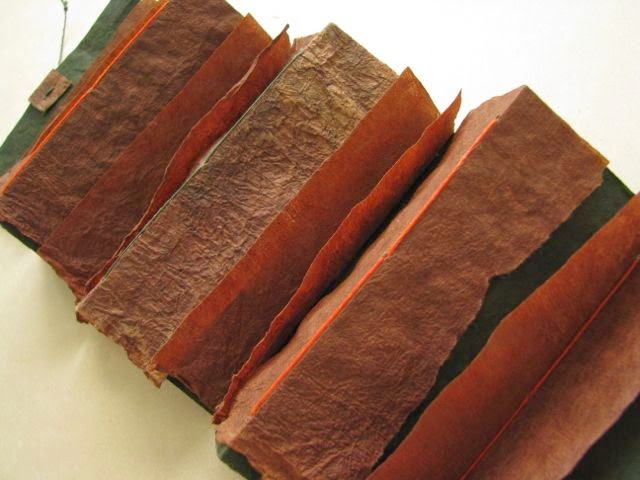 I came home Sunday night and didn't leave again until Tuesday evening, which must have been my (smarter self's) way of insisting that I have real down time. Some of the heat had me on the floor just sweating, but the cool front that came in and the more obvious darkening of the days has flipped a switch. Still no real rest or holiday, so I've locked myself in to make more sample books, almost finish a second duck, and do a few things on the list (but not a whole lot). One thing I finally finished was a guest post on May's fabulous Paper Slurry blog, all about the naginata!

I hope to lock myself in for more of this week, now that the harvest moon has passed. So very much to do, and so very much to NOT do.
at September 09, 2014 2 comments: 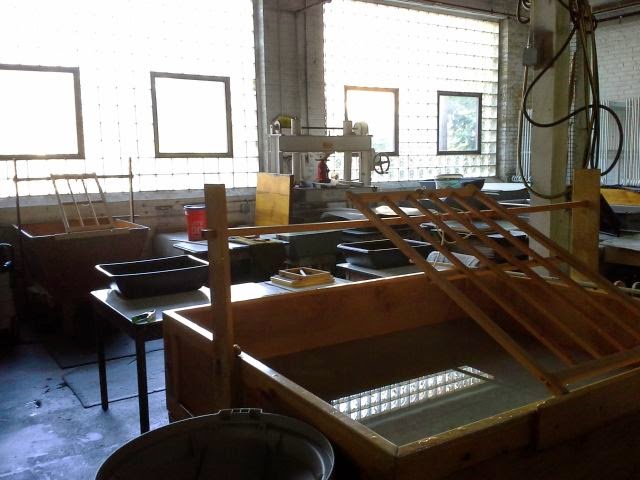 Last hanji class of the year from last weekend: small vat for webal in the back corner, big vat in front. I managed to use the pulp from the previous class with just a little bit of new stuff used as beating practice. Don't ask about how bad an idea it was to leave things in the vat for two weeks in this weather. 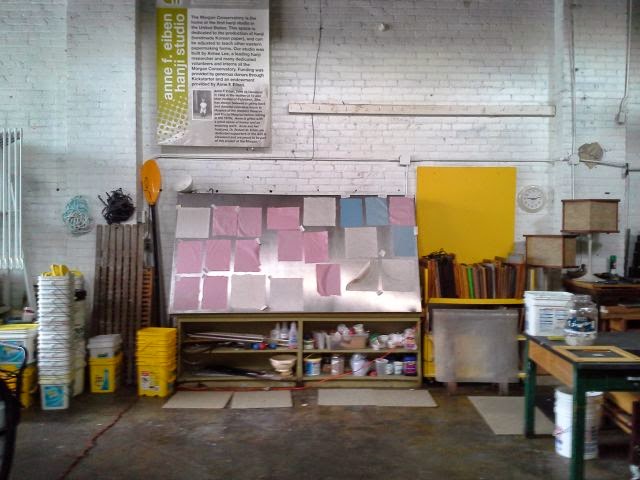 The picture is blurry because I was trying to shake off a mosquito that was excited about early morning meat (me). Someday, we'll get this stainless surface set up as a heat dryer. For now, it's great for overnight drying. Colors courtesy of leftover dyes from Melissa's class, and fibers include gampi and kozo. 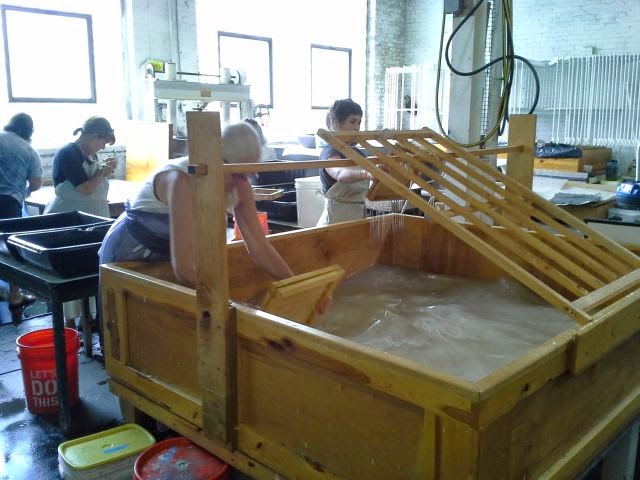 All five students are in the photo, though Raven's head is just behind Linda's. At one point, she joined the two at the big vat and we had three pulling from it! Fun. I liked this smaller size class, SO much more manageable when it came to large hanji making. I could barely walk by the end of the weekend because the floors are a nightmare on my body, and wondered what crazy person (me) would teach this class in two days PLUS all the bark and paper manipulation stuff. 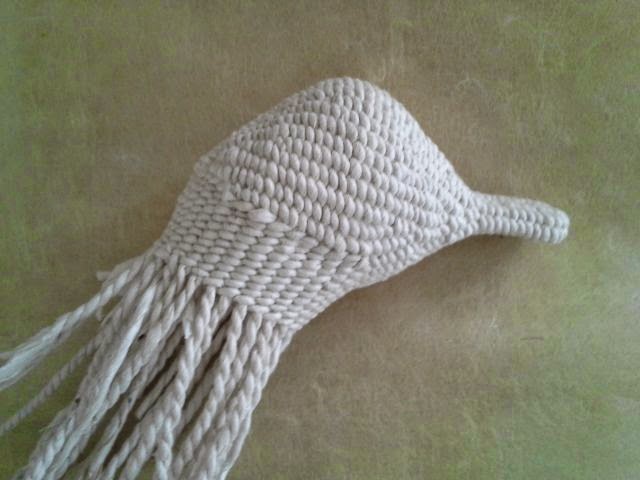 This is not in focus, either, but only because I shot at night. I'm slow on this duck, and not sure it will be done before Korea but I sure hope so. 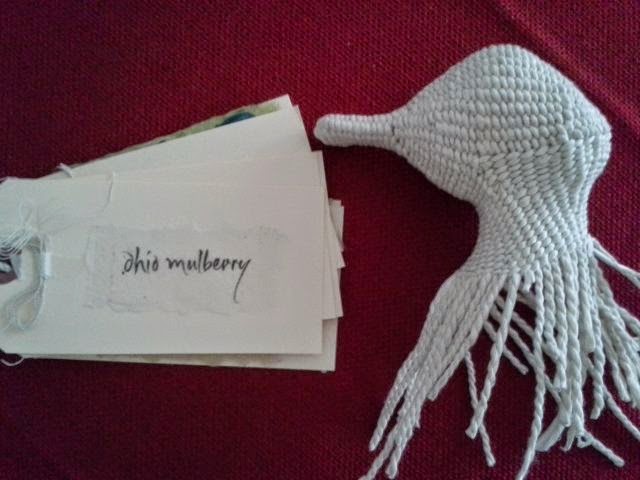 I realized halfway down the neck that the head was shaping in the wrong way again, so I attempted to make a curve in the back of the head. There are so many pitfalls ahead of me, but at least I tried a new shape. Next to the duck is Therese's lovely sampler for the Morgan of EPS papers. 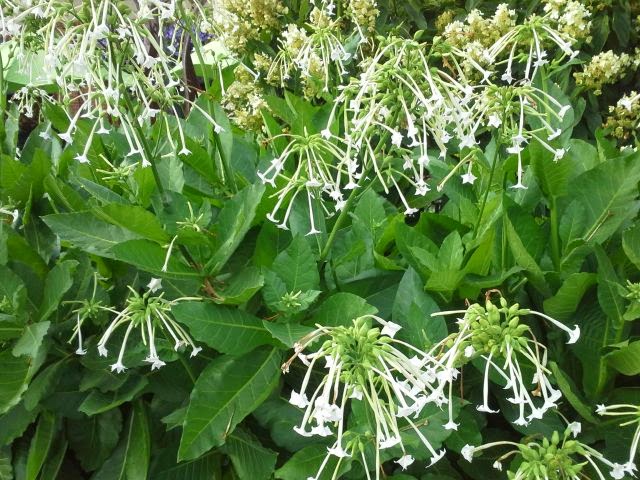 After laboring over the weekend, I got a day off and admired the landscaping with my person at the outdoor mall we frequent. We made a quick trip out to farmland and I sat in the car with a magazine because I didn't have the right clothes to hack back overgrown foliage. 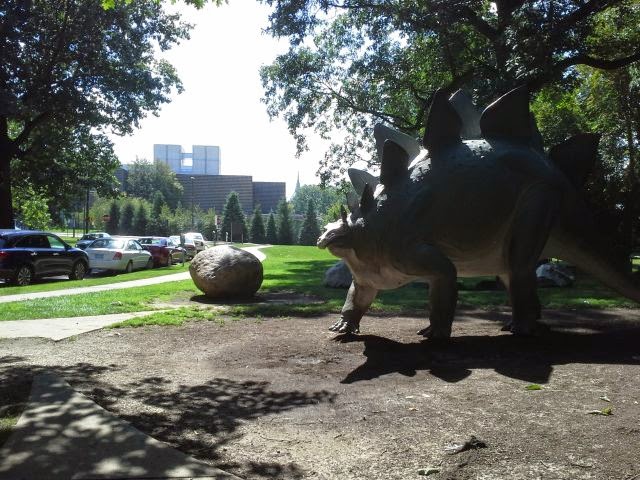 Today I made my first trip ever to the natural history museum in town! Sad to say, I have NEVER been to this pocket of Wade Oval, as it is lovely. 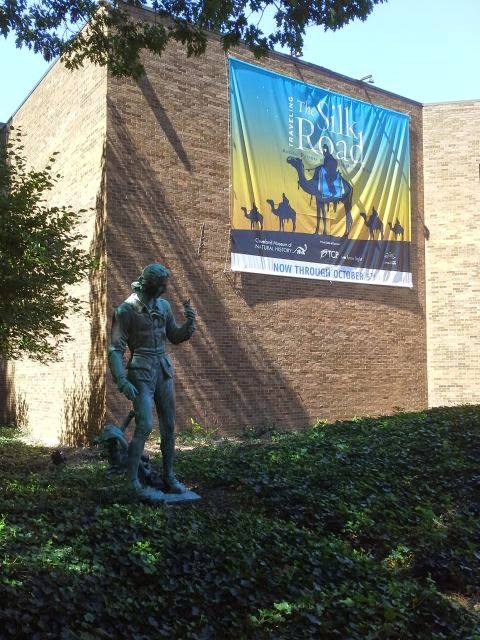 Carl Linneaus in front of the banner of the show I was going to see with a colleague. I wish there had been more real artifacts rather than replicas and facsimiles, but I learned a LOT. 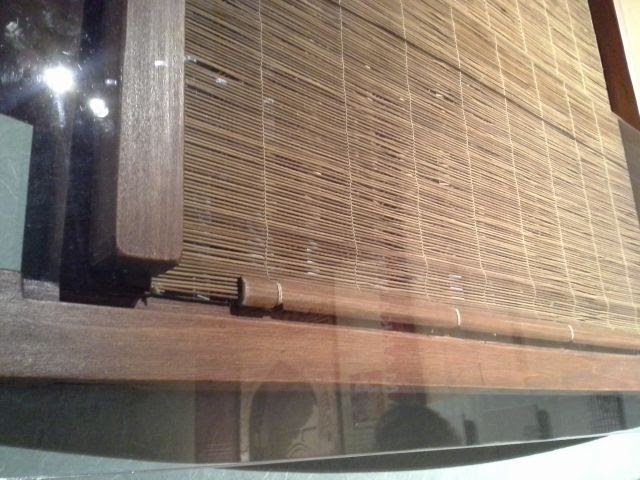 The paper section was not perfect (like having a piece of papyrus labeled as mulberry paper), but hey, there WAS a paper section! 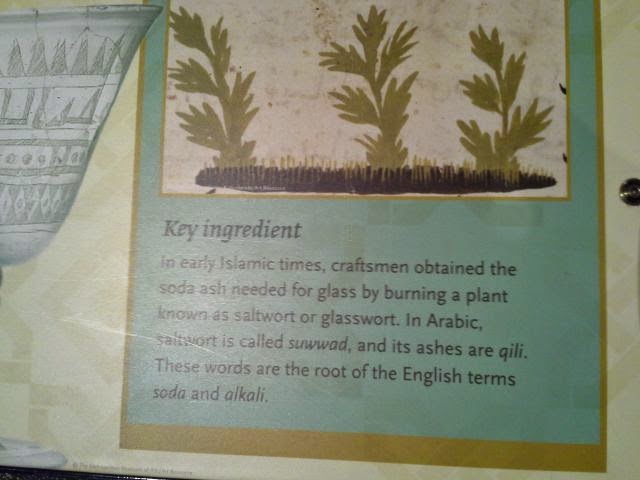 And I liked this bit about soda ash, in the glass section. I'm daunted by how much prep lays ahead for my trip to Korea (like...buying the flight there...!!!), and I know it comes from me dreading the hard bits (which are about 75% of the trip), but am doing my best to keep my head above water as my less than a month left ticks away.
at September 03, 2014 3 comments: