Last bits of the year 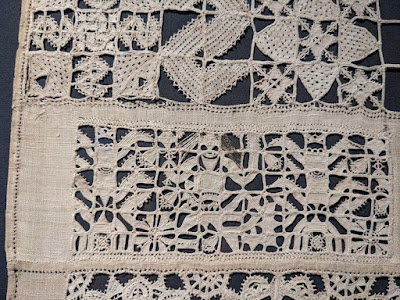 [This is from a lace show that Tatiana recommended, which I got to visit with Justine and Christie right before xmas on those days that were so bad weather-wise for most and in NY was warm and rainy turning into snow and then coldcoldcold plus howling wind.]
I'm in hellish re-entry from family time in NY where the time is not sufficient for the tasks and the tasks seem to multiply. The deadline is hard as I move to Oberlin on Monday and start teaching class the next day for the next month. One institution asked for a teaching proposal waaaaay back earlier this year and I have not done it, and only in recent days did I think, Could I ever create a proposal for teaching that I would actually be excited to fulfill? I never thought of doing such a thing, something that would serve me as much as everyone else. But of course that goes immediately on the back burner as I deal with basic stuff like a new hot water tank and packing and feeding myself and making sure nothing is on fire.
Until I get some composure, a few bits to share. Here we go headfirst into the next year!

I really enjoyed this podcast about periods, which everyone should listen to (short episodes, very useful information for all people, not only ones who did/do/will menstruate—with the last one, in fact, saying that there is no good reason NOT to teach non-menstruating bodies about it).

Jan 22 is the deadline to apply for a residency at Montello, a quiet place in the desert off the grid away from wifi and phones and all about learning to live with yourself and the world around you. I could never handle a residency like this (not the being there, only the getting there) but have supported it since I could and think it would be great for lots of other more sturdy and adventurous artists of all stripes.

Herb is a lot of things—writer, scholar, active community member (not in the amorphous sense but where he actually goes to meetings, creates protocol, takes care of the place where he lives through action and applied knowledge), thoughtful and gifted friend, and chaplain to those who don't have one. He also gives his work away for free. My favorite is Slush because I am more a non-fiction person, but you'd learn plenty from his novels and stories if you love fiction.

The last month always gets demolished 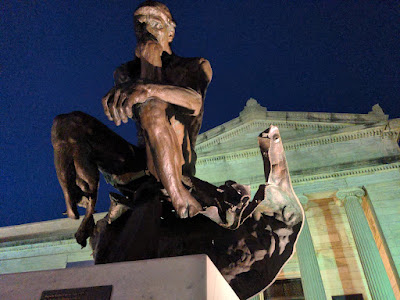 I didn't know until my friend Frank told me that there was a Rodin Thinker at the local art museum that had been bombed in protest of the Vietnam War and that the museum decided to just leave it in its destroyed state (rather than relegate it to lifelong storage, or try to repair to its original state, which wouldn't have been possible) in front of the former front of the museum (now kind of the back of the museum). So I took a look one evening at something I had NEVER noticed all these years. 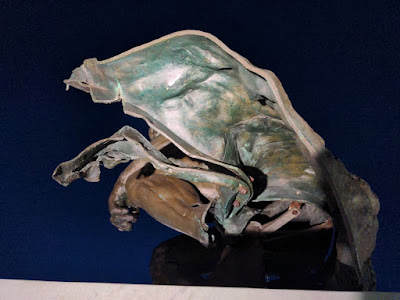 I rarely am on this side of the museum, so that's one excuse. But I guess it never looked like a bombed sculpture, either. Getting close, it's actually kind of remarkable, and made me think of Steven Young Lee's work. It turns it into an old master's masterpiece kind of thing to embodied history. Given the culture of that time embraced the idea that thinking happens only in the head, this guy seems not perturbed at all that his feet are gone. We still foolishly think that it should be fine of major parts of our bodies, nation states, and planet are irreparably mutilated and destroyed that the rest of us should just carry on. 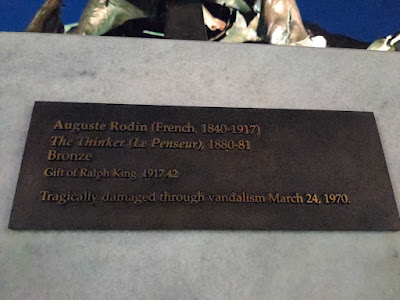 Right now, when I read this, my feelings don't match the words "tragically." If I was alive and knew this had happened to one of my pieces in protest of a very bad war, who knows how I'd feel. If I was dead for over 50 years and it happened, not sure either how tragic it would be. It feels like pretty straightforward human intervention. Almost a collaboration with bomb. 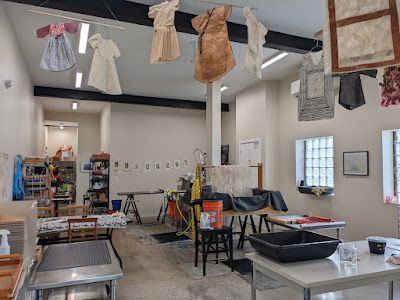 That was what I was thinking months ago when I looked at it. How is it going in the studio? There's a ton of unfinished projects going on, just as bad as at home, where my book/dry work is. So nothing has changed, except the idea that maybe it's a good idea to clear the immediate vision of stuff that has been malingering for too long. As if there was appropriate storage for that stuff! 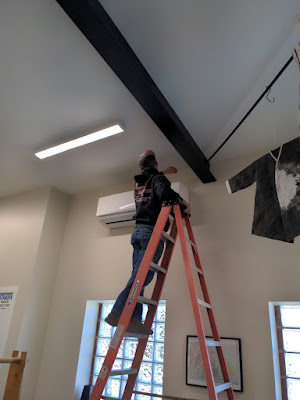 Our contractor came by to look at the mold spots that alarmed me on a building only a year into a gut rehab. He was using the ladder I got from Bill, and I was in deep denial when I bought it. I've always managed to get around ladders but this one is 10 feet and heavy, and every time I pick it up I throw out my pelvis (which is extremely unstable to begin with). My PT recommended a different ladder but it's too hard to figure out which model to get to still have access to these 13-ft ceilings. But given how much I do go up and down, I will need a better solution since the exercise/PT route is so slow—I won't get strong enough soon enough! 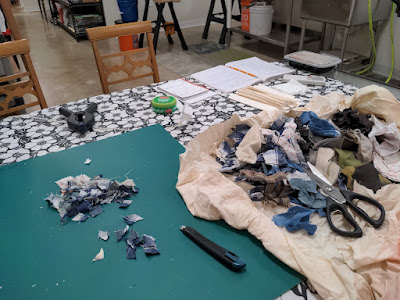 Michelle came by a little after this stage to help cut down rag. We were going to run the beater this weekend to make paper for FUN and then the beater refused to turn on. I made an emergency call to a friend and after I emptied it of water and then removed the switch cover, it turned on again (very annoying because then I could have just left the water and beaten the pulp but I had lost all hope by then). So this will have to wait until next year, likely. 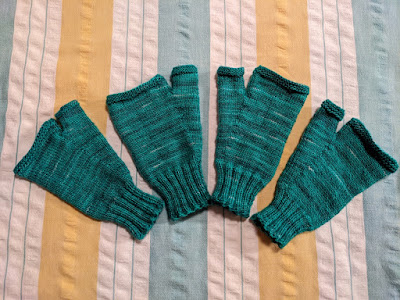 I leave in days to see my family and friends in NY. When I was sick over Thanksgiving week, I started going bonkers knitting (so the idea that I was resting was a pure lie). The first was too small, the second too big, the third not exactly just right, and the fourth not perfect yet. I'll keep two mismatched ones and give two mismatched ones away. If I can stop tinkering with them! Last night I took out the binding of one that felt too tight and even after redoing it...it feels too tight! It must be the super control freak in me raging up because I can't control the people who park in the studio parking lot now that the bar next door has opened and no one appreciates the handmade signs I made to say the lot is only for art studio folks. 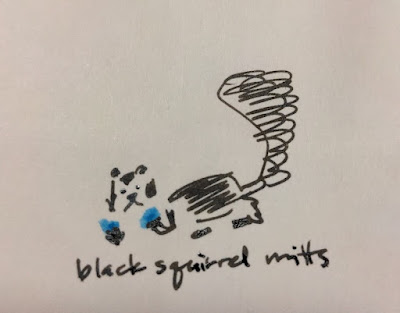 But hey. Hoping that sabbatical next year includes more comics, one of too many things I want to do all at once and then nothing happens except trying to fix my house + studio + body. But there's no fixing to be done, only a slow process of learning to live with imperfection. The quiet two or three weeks of studio time I had hoped for in Dec disappeared when I was asked to do a shoot and then it was cancelled (lots of prep and then lots of cleaning up). But this weekend I have a studio visit, my LAST official engagement of the year. I need to get over my denial about what I want December to be (blissful studio time) and accept it for what it is (getting ready for serious winter AKA squirrel behavior).
On a less cranky note, please help fund more grants for the Collective!