A certain home away from home 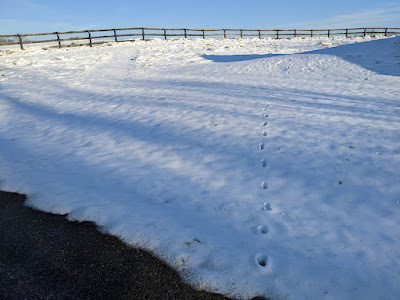 The drive to Virginia took me through five states and all manner of roads and landscapes to help prepare me for a return to Oak Spring Garden Foundation. The tracks outside my studio confounded me, as I don't know anyone who walks like this. 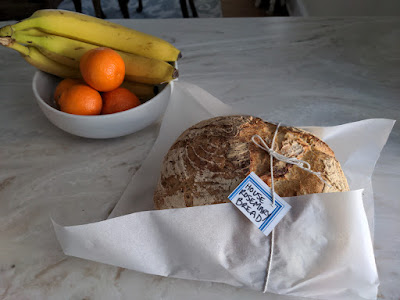 The kitchen greeted me with what I had forgotten: how well they stock it for us! Saskia had prepared a delicious meal (as we are all in separate houses because of the variant) so we could each have dinner on our own. This bread is gorgeous. 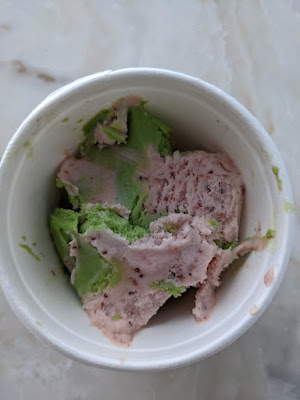 She used food cellared and saved from the farm, including this strawberry and sorrel ice cream! 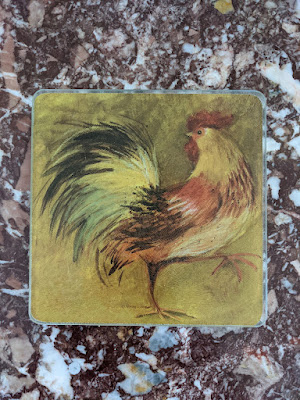 I also forgot that my house is rooster themed! It felt even more appropriate to stay here again. 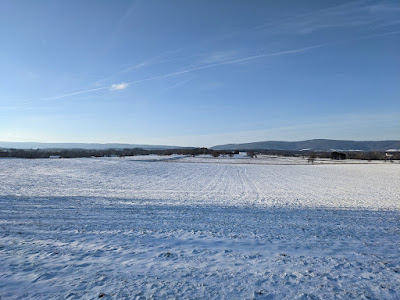 As soon as I unloaded my car, I bounded outside because if I didn't do the walk now, I wouldn't get around to it that day. I was delighted by all the snow, as I had not had the nightmare experience of being stranded on I-95. 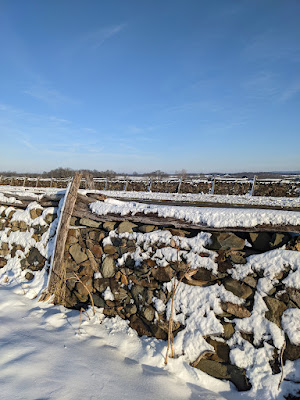 I went in search of milkweed and was really sad to see nothing in the fields but deer bounding away from me. I thought they didn't mow but saw clearly the next day that they must certainly mow one last time at the end of the season, not only the paths, but the entire fields. The only milkweed that I saw was next to the stone wall where no one could mow it. 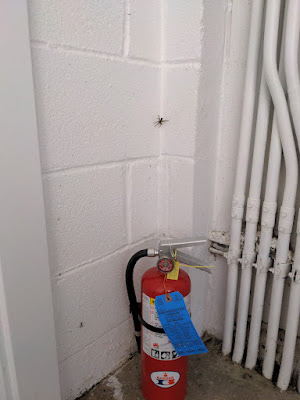 I had already come with a little Ohio milkweed to get myself started, so I came home empty handed. I saw the biggest spider I have ever seen in my studio, hoped it was dead, and then it disappeared so it is not dead. 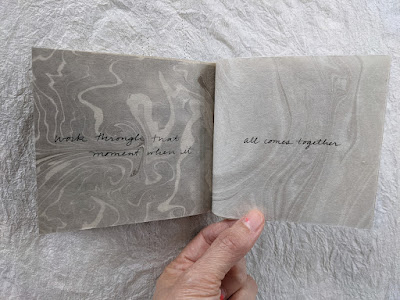 I made a book right away, had been stuck for so long and now I am unstuck! As if I am taking up right where I left off in August of 2020 when I was last here. 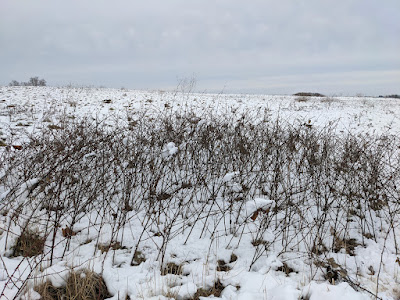 The next day, because the residency director had mentioned snow on milkweed heads, I went to the other side of the property to search. After turning back on the mowed fields, I finally thought I might see something, and hiked to this thorny patch behind the office. 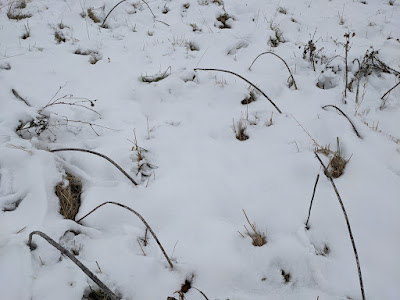 There they were! Their heavy heads had fallen down but you can tell from the mottled stems who is who. 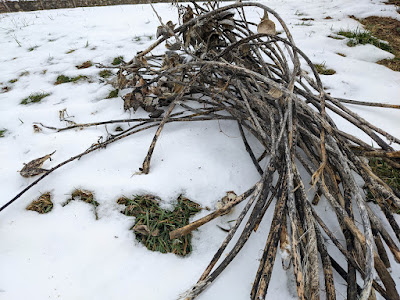 I didn't take a lot, just enough to test. 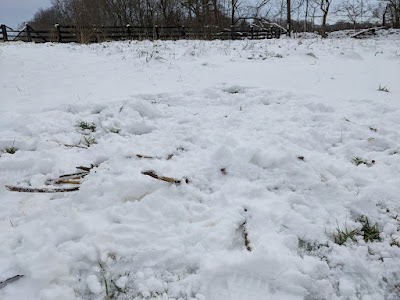 Then I buried them under the snow behind the house. They're still there, I'll deal with them when I get to it. 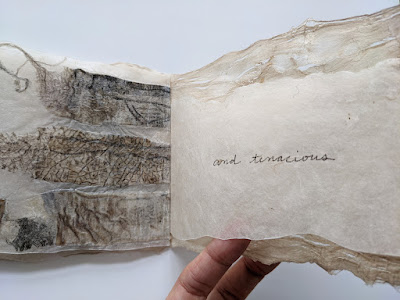 I made another book, inspired by a dear friend's loss. Again, the pieces had been pretty much in place at home but I couldn't figure it out until everything clicked here. 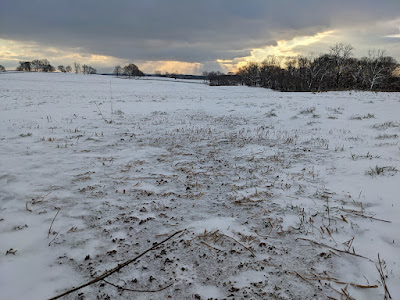 The other morning I knew I had to get out when the snow plow woke me up. The sunrises are wonderful and today I watched the light shift from the deep orange to white. I get why some people rise before the sun to get this high, though I'm not one of them. This day was even more dramatic because of the clouds. 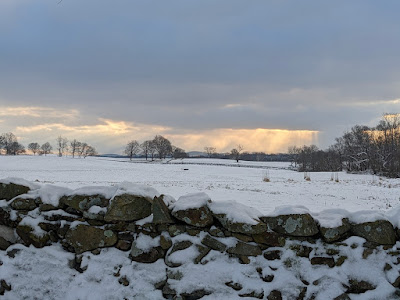 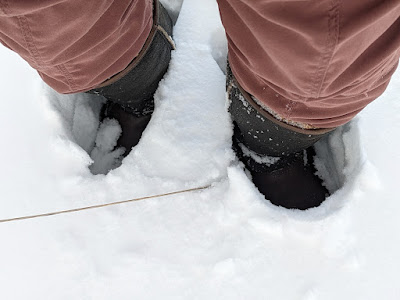 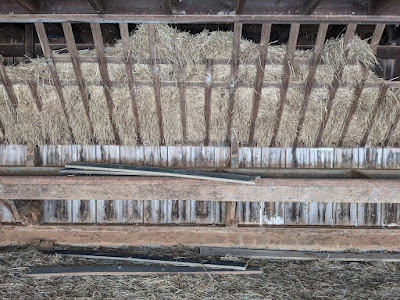 But bitter wind, so I hid out here for a bit and looked at the hay stacked above. Today when I went I saw a bird flapping in the glass cupola. 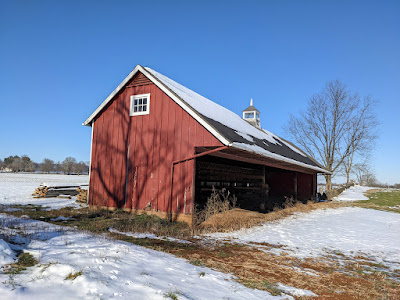 This is what that structure looks like from one angle. It's close to home but still in the field, so a good landmark. 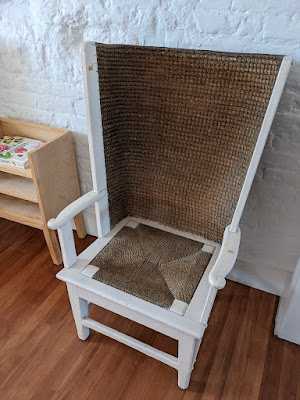 A few of us were able to have tea yesterday and tour the renovated Schoolhouse. BASKET CHAIRS! 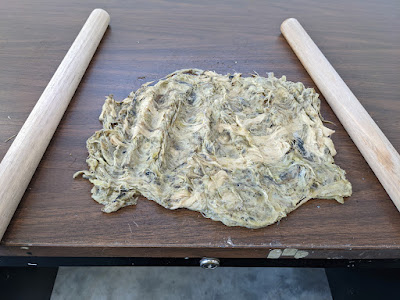 Because I was being tortured by a big application for my first few days, I didn't get around to beating my milkweed from home until today, even though I cooked it as soon as I could. 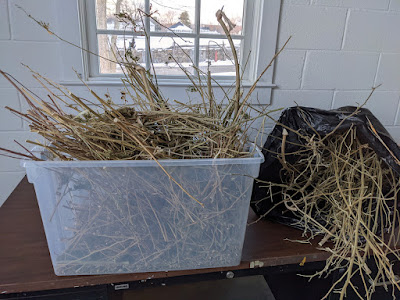 I got a call about hemp stems from a farm that would otherwise be burned/composted. After picking up the sample batch, I laughed all the way home because my car reeked of weed. 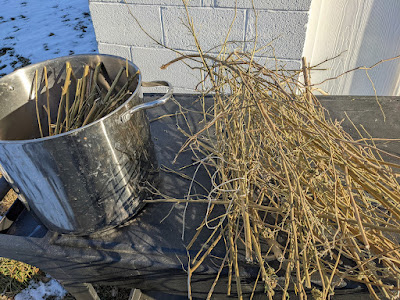 I've never been able to work with hemp this close to the ground because up until now it has been illegal (only made hemp paper from the fiber, stripped and cleaned, many years ago in grad school and it was gorgeous but I almost destroyed the beater in the process). So I wasn't sure how well it would do with my usual steaming and stripping method. 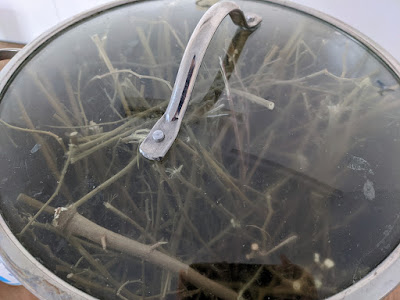 It took a little while to get it to the point where it looked ready to strip. 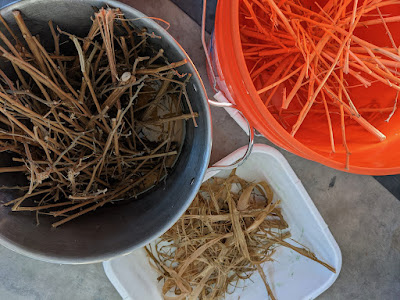 And strip it did, beautifully! 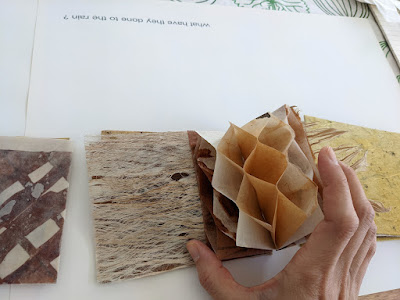 The books keep coming. This one required a bit more time in the press for the components but I knew how it was going to come together. I finally get to use my paper honeycombs! 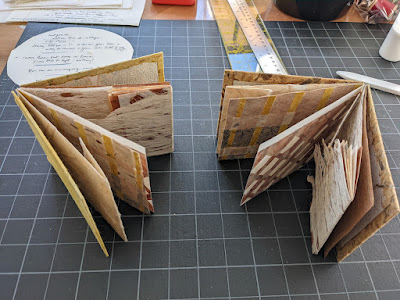 Bound them after lunch, before a zoom meeting that I couldn't get out of. 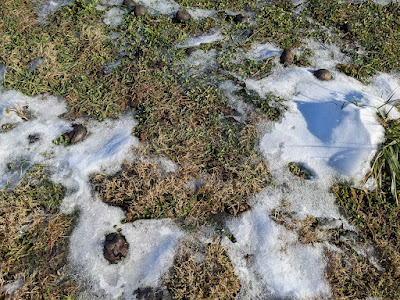 Then I did a quick walk today and found black walnuts on the ground! I also figured out before this, pretty quickly, after seeing all the tracks again, who it was. My second day or so I saw a red fox next to the house, running next to the stone wall. I had been so excited, and another artist confirmed that she had seen more right outside her studio. One was hunting and another chased by a dog. 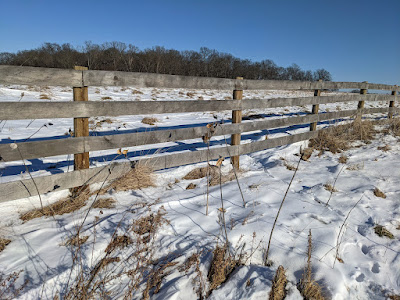 Before I climbed this fence, I found more milkweed. Left it for later, if I need it then, as I had a few dogbane stalks in my hand to make cordage. 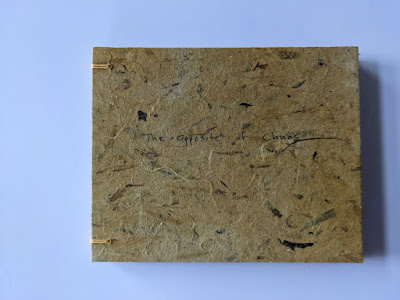 This is not a good photo because it was getting close to sunset. But it says, The Opposite of Chaos. 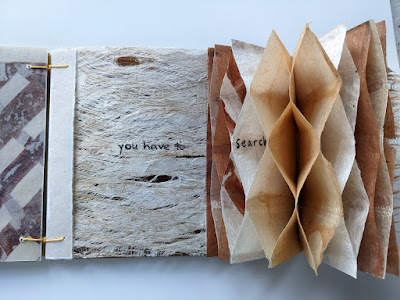 A variable edition of two. So satisfying to finally put the pieces together. Another big pieced book, bigger than this, is in the works! But I've had to take meal and snack breaks, so I'll have to wait until tomorrow. I am incredibly happy to be back; this is exactly what I needed for the start of the year.
Where am I? OSGF.
at January 08, 2022

It's such a blessing to see your energies released. Thank you for sharing your enthusiasms, something we all need to borrow when our own runs a little short.