A walk through the work 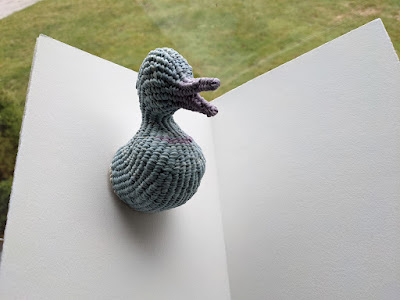 The more I realize I need to make deep changes, the harder it is to shift gracefully. Meaning, I can't ditch all of the things that I committed to before I realized I am doing too much that doesn't feel vital. But now that I am clearer about what I want, it's harder and slower to get other stuff done, as well as the important stuff! To begin 2022, I want to share what I want to center going forward: my work. I started this duck to use hanji I dyed in Korea with indigo and gromwell. First, I thought to make another teapot so from the jump the mouth needed to be open. Once I got to the hole for the lid, I no longer wanted to do that (AKA had to get back to the non-central work). Then I thought it would be funny to make a mounted duck, as much as taxidermied animals on walls creep me out. And then I thought it would be funny on a book cover, though most would want it as a pop-up inside the book. But pop-ups have to lay flat until the moment their spread opens. If you treat it as a sculpture, then as long as you never have to turn pages, it could sit inside of a book. Mostly it was hilarious in this moment, and hilarity is a wonderful studio companion. 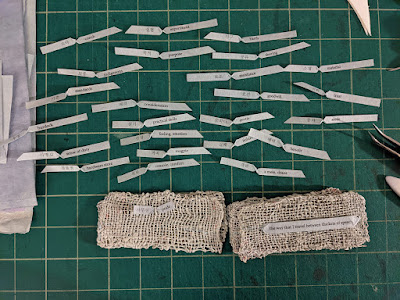 This book had sat for months after I sewed it together. The idea for it finally came together all at once and what I also realized was that I sewed it together prematurely, so I tore it out again to construct. In the process, I realized the initial binding was inappropriate, so I changed that as well. This is more of the indigo-dyed hanji though the pages were done in fresh-leaf indigo from a couple summers ago, barely perceptible. 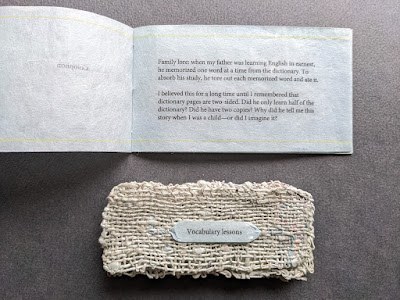 I was home in NY to see family at the end of Dec and forgot to ask my dad about this story, if he remembers telling it to me. All I can think about is how dictionary pages would taste, the ones made from very thin rattly paper. 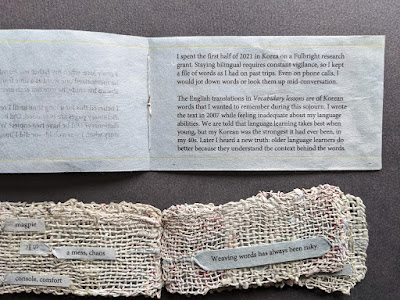 Lately I have been thinking a lot about vigilance, like when I watch people fumble around on airplanes because they don't know where their bags are or who might be behind them. It's amazing to see how hard it is for people in this culture to share. As a dear friend said sometime this year, sharing should be easy! It should come easily and be easy to do but it seems harder and more impossible in these systems we inhabit. 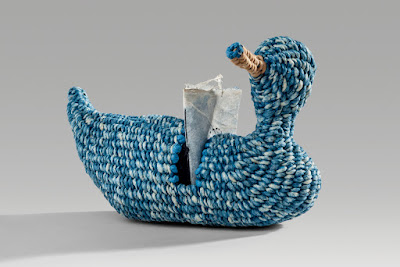 With the half duck out of the way, I was then able to focus on making a new one for a book show on adaptation. I had had so many ideas for new books when I first got the invite, which was probably when I was in Korea (that feels like a lifetime ago, in someone else's body). But now up against hard deadlines that coincided with other rock hard deadlines, I decided to do a mashup. The book and/or duck adapting to the form of each other. But not really, as they are each very much themselves. I still want to work on the book, which is why I only chose this shot—it will probably in the final incarnation look different but I had to get the slides shot NOW. I had felt all this pressure to make some kind of deep serious wordy "scholarly" book because of the roster of the other artists in the show, but lately I am also coming to realize that my work is exactly that: reflective of me. And I make weird, wonky, silly, rough, very obviously by hand stuff. I will never make pristine printed books that so many programs and studios and extremely skilled artists churn out with great care. I know how to, but am not interested in doing it because that is no longer work that feels close to central. 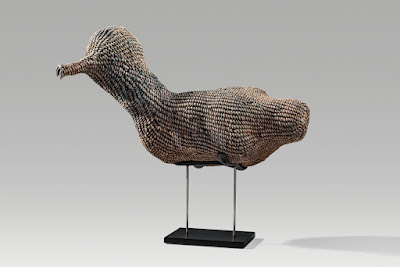 And so we come to this one, which I had frankly been ashamed of for years. I think I started it in 2017 while on a plane from Australia and it was the one time I thought I could get away without the extremely basic math, or simple counting, that I usually do. The flight attendants were baffled because it didn't look like anything to them and I don't blame them (I started from the back of the duck). By the time I was done, I thought, oh NO. That is very weird and not what I intended to do. But also this is what happens when you are far up in the sky for a very long time. It went through a few different dye baths until I got here, and then I paid a very skilled mount maker to build the stand. Incredibly, I think that was what started to change this guy for me. The care with which he crafted this stand reminded me to not be so mean to my own work. 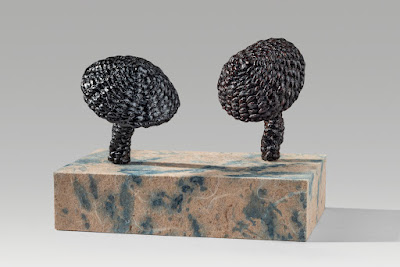 I had also done these years ago and while one set went to a different dye bath, I think these stayed white until I mailed them to an objects conservator in Boston who had learned on the side to do Japanese lacquer from a Korean master. We traded: I send more mushrooms than I need lacquered and as her fee she'd keep some. Covid messed with lacquer shipments from Japan so they only got through a certain number of coats before I needed them back for a show at the end of 2020. You can spin them around on their pins for whatever configuration on the stand you like. They have very interesting conversations with each other that way. 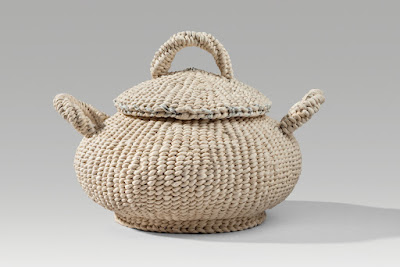 This was the piece I did immediately preceding the half duck. My photographer makes everything look gorgeous, but this was hard to the end because I had been trying to match it the wrong way around. But in the end, good things can come from going ass backwards. The joy of getting it to the place I wanted was what gave me the energy to launch into another duck when my hands were tired. 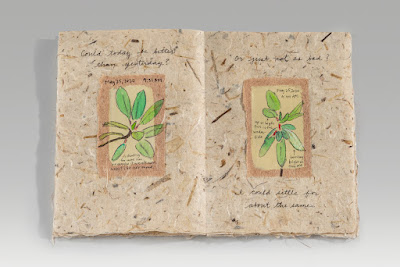 I made this book sometime in the second half of 2021, though the structure I made in 2020. I am very happy with it but didn't get to shoot it for a while because I don't live close to my photographer and didn't want to ship too many boxes at once (sometimes the batches have to be divided if I want one to go to my dealers later and one to come to me and who knows where I am at any given time). 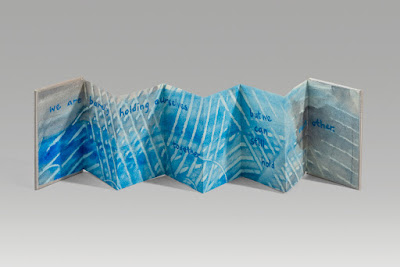 This was a tiny sample book that I made in the fall semester of 2021 but it was so delightful that I wanted to do something with it. I couldn't figure it out for the longest time until I remembered that I could go back to my tiny paintbrush and some gouache to do the lettering. I remember being in fifth grade when a classmate's mom came to school to do a calligraphy demo and workshop, which was a revelation to me. At this point in my life, I'm certain I will never go down that road but isn't that what I've been doing this whole time? Trying and failing and trying again to sort out what is my work and what isn't.

Finally, links to the people I mentioned above. I want to make this change going forward as a tiny way to participate less in attention stealing, the way the internet insists that we hyperlink our way away from the center until we don't remember how we got there and where we are going:

Dyeing in Korea with Cho Misook

Photography, as always, by Stefan Hagen (also, applications for his Montello residency are due Jan 23 for this summer—a way to really be out in the middle of nowhere alone)

New artists' books by me

New ducks by me

New hanji art by me