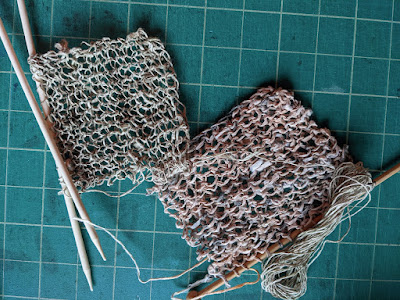 This began in March. April? Something like that. I have only gotten this far but eventually it will be another knitted book because someone asked for one and I'm almost completely sold out (the only remaining one is pretty much out of most budgets, even for fancy institutions that ask). 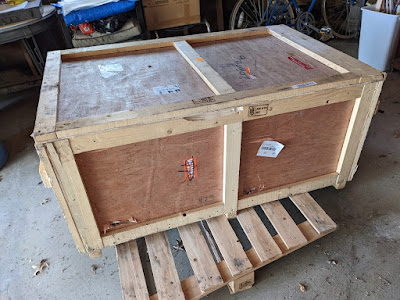 My art arrived back from the UAE months after the show closed because of many mishaps having to do with the shippers not knowing how to do this or really caring. They left out part of the shipment and refuse to mail it back because they say the books have closed on this event. Good god. Anyhow, because they marked it incorrectly as "antique clothing" worth 18,000 USD, I had to pay import duties just to get my own work back. Then, because instead of saying it was paper artwork, they said it was clothing, the lightness of the shipment triggered another alert saying the weight doesn't match the description. Now I have a giant crate and no time to repurpose it into a storage unit. So it will hang out in my garage for a while. 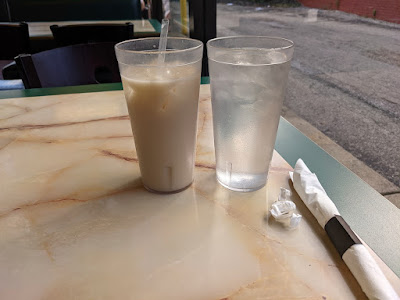 Last week I was finally able to visit a Guatemalan place I wanted to try on the recommendation of a past student (who has moved close to the studio!). The part that made me happiest was the horchata. And the most kind and incredibly competent server (who worked alone on a slammed Friday evening) I've had in recent—or all?—memory. 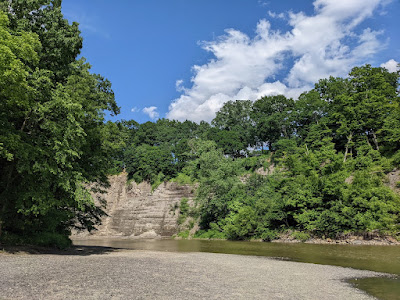 That was after taking a long long walk with Diane at the Rocky River nature center. We were both confused because it's not actually in the town/city of Rocky River. It was humid and I got a little bit up by mosquitoes but it was so worth being under tree canopy most of the time. 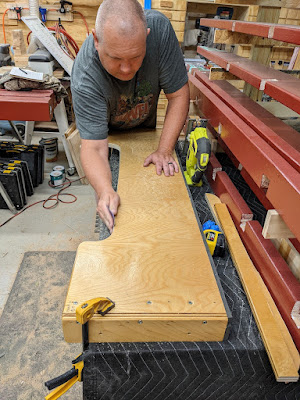 I also took the plunge and had Bill refine his original hanji vat design for me so that my new students in July can test it out. Instead of having the wall dig into everyone's ribs, it can be at the proper belly level, plus we tacked on a little shelf so that the frame has a place to sit that's not just the edge of the vat. It's always scary to do this kind of retrofitting (especially given how carefully I coated this entire thing with polyurethane a billion years ago) but I hope it works. 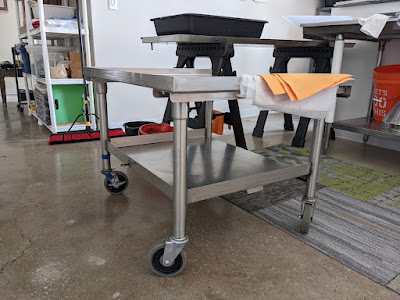 AND . . . it only took months of my life, probably over half a year, but I finally fixed this cart!! One caster refused to reach its nut, so first a friend hammered the threading straight. Then Bill recommended that I sledgehammer the piece inside the leg holding the nut down further to reach the thread. I spent a day doing something incredibly stupid (trying to fit a square peg into a round hole, so that the rod got stuck inside), knowing that it was a bad idea, and then spent the next day correcting the problem (drilling it to bits so it would slide out). But after all that drama, the end of the threading finally found the nut, and the table is functional!! In the process I also realized the old grease all over the wheels was tracking all over the floors, so I cleaned those—probably would not have happened if not for all the drama and close looking. 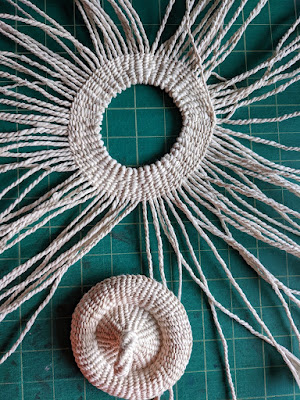 I don't know how many weeks ago I started this piece backwards. Meaning, the lid was made in 2020. When you're supposed to make the body, and THEN fit the lid. But I am stubborn and had lots of ideas. 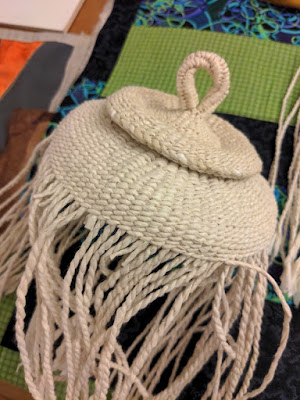 I'm still stuck around here because I haven't had time, and the last round of weaving left my right shoulder feeling totally crippled the next day, requiring a lot of manual work at PT. I have a new idea, though, and it makes me crazy that I can't work on it right away because of other scheduling conflicts. 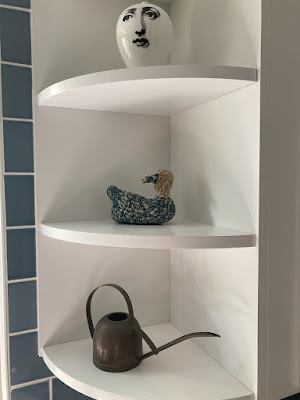 Friends from Chicago bought a couple ducks last month and this is one in their new beautiful kitchen. I feel so honored! Pride of place is for real. Meanwhile, I've been scattered with all kinds of physical activity, like moving giant heavy furniture for the studio. I am still struggling with basic things like walking (especially up and down stairs), so it seemed like one cut and giant bump on my hand from a big heavy metal rod falling onto it was pretty good for one day of putting together shelving that should be done by two people. Learning my limits is hard as I keep exceeding them and hurting myself on a regular basis. 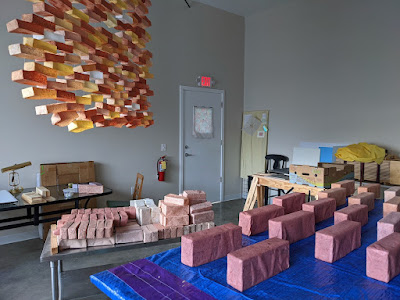 This is the bear that has taken over my artwork-making hours. Because it's on deadline and a different type of work than I actually want to be doing right now, it makes me cranky. I churned out many new bricks, working daily to finish a new batch of abaca fiber. But the color match was way off on more than the first half of production, so I only have less than 100 to add to the hanging. Which I cannot tack to the bottom: this requires unstringing the ENTIRE thing and starting over, to integrate the new ones. Today was supposed to be my work day on this beast because tomorrow, life changes again. But Vagner came thru town and we had a wonderful visit where he reminded me of lots of important things (friendship, sticking up for yourself, understanding your place in the world and what happens when other people disagree about that place). This meant that today I didn't feel like going to the studio first thing, especially in a heatwave, when my car A/C decided to die.

So...I'll be less prepared than I'd like for a Saturday delivery. This is precarious because tomorrow there will be a whole lot of activity at the studio that is guaranteed to wear me out, but also fulfill promises made a long time ago. More on that once the experience passes!